Is He Really Dead?

Is he really dead?
The world may never know.
How convenient that Bin Laden ysh"u was buried at sea, no?
When Saddam Hussein's ysh"u were bumped off, they were put on display for every American and Iraqi to see for himself, and for autopsy results to be confirmed for everyone's satisfaction.
Bin Laden could have died from kidney failure for all we know. But, if he was eliminated, we will never really know the precise details as to how. Maybe he could have been captured, but the orders were to kill him.
What a shady president the U. S. has. It takes him several years to release his birth certificate. He has a social security number from the State of Connecticut where he has never lived. He used it to register for selective service in 2007, when he should have registered in the 1980's. 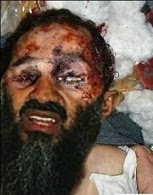 And, now this? Check out the photo. Is it him? Maybe it is.
But, that's not the point.
Whether Obama has done anything wrong or not, is also not the point.
His decisions make him appear to be hiding something, or somethings.
His actions make the U. S. look bad. the rest of the world is asking, if this is how the American president operates, then is this also how Americans operate?
CBS News claims that the body has been positively identified. But, c'mon. Does anyone still trust the mainstream, American news media?
(Tip Credit: Eliyokim Cohen @ Jewish Side Kick)
Posted by Esser Agaroth at 2:44 PM