The Embarrassment In A City Called Modi'in 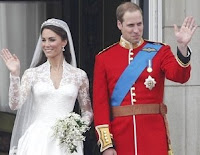 As Anglophiles around the world prepare for the upcoming nuptials of Prince William and Kate Middleton, British residents of Modi’in plan to offer their own special mazal tov to the royal couple.

Over 200 people are set to attend a sheva brachot celebration in the streets of Modi’in hours after the royal wedding. The Shabbat dinner will take place in the Shvatim and Moriyah neighborhoods, which are popular with Anglos and have many British residents....

Now, let me get this straight...

Jewish children are going to bed hungry in South Tel-Aviv. The rain of rockets on S'deroth, Be'er Sheva, and Ashqelon could start up at any moment. Hizbollah is doing push-ups and gathering ammunition in preparation for its own rain of rockets in the North.

There are young Jewish couples in the Shomron (Samaria) and the Hevron Hills who can barely afford a modest wedding, the used bed they sleep in, and the rent on their caravan (trailer - yes, there are Jews who live in trailers...).

What about the new orphans of Arab terror in the town of Itamar? Will they be spending Shabbath with anyone to raise their spirits?

And, if you do not have any concern for any of the above, then what about the poor British and American, new immigrant children in Efrath, Beth Shemesh, and Ra'anana who any get $50 a week in allowance, instead of $100. since moving to Israel?

Boo Hoo!
But, no. Instead of being concerned about all or any of the above, your fellow Jews, you are concerned with celebrating the marriage of a couple of goyim (non-Jews),...and not just any goyim.

These goyim are a the future King and Queen of the England, the very same England which royally (pun intended) screwed over Jews left and right, while in control of Eretz Yisra'el, including killing them. (In "Competing visions of 'Never Again,'" Caroline Glick reminds us of just how nasty the British were toward us.)

It is one thing to be stuck in the galuth (diaspora/exile) mentality. Glorifying it is a completely different matter.

The British Royal Family can afford their own mockery of a Jewish ritual. They do not need any help from ex-pats in Modi'in,...home of the Maccabees indeed!

Matithiyahu and his sons are rolling over in their graves!
Posted by Esser Agaroth at 10:05 PM