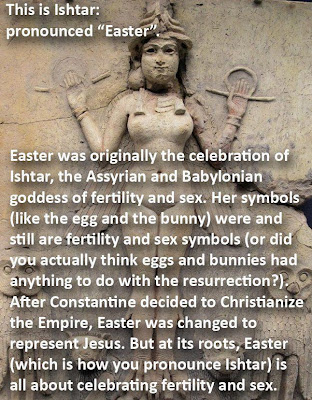 And speaking of fertility, the word "estrus" also comes to mind. I do not know the source of this photo and comments. It was going around facebook. If you happen to know its origins, please leave a comment, so that I can give that person or group credit.


This is probably not what most of your were expecting, based on this post's title. Nonetheless, I encourage you to continue reading.

This past Sunday was the avodah zarah (foreign/forbidden worship) celebration of Easter. That meant having to deal with an inundation of Christian "pilgrims" to Jerusalem and to other parts of Israel.

It will only continue this week and next with the "orthodox" Easter celebrated next Sunday, not to mention Christians getting the most out their plane tickets to get here, by spending more than just a few days here.

A friend visiting Israel for Pesah was in Jerusalem's Old City Sunday, watching this season's dramatization of the original avodah zarah parade, assuming it really ever took place. He said he would have to call me back. He wanted to see if Jeezer would show up. I rolled my eyes, and got off the phone. Later, he called back telling me of his disappointment. Jeezer was a no-show.

What was he doing there in the first place? Well, apparently, he was VERY bored, and ended up there somehow.

Christian "friends" (Translation: Christian "money") flow into Israel, and with them, their influence. Some Christians come to Israel for extended periods of time, in order to "volunteer" their time and energy to "help" Jewish farmers.

Some even sneak their way into a caravan (trailer) in a Jewish town in the Shomron (Samaria). I am still waiting to find out how THAT feat was pulled off. I won't hold my breath, though. No one is talking.

*Note: The photo linked here is from a screen shot to the video this young, Christian couple made. When clicking on the link to the video, it now comes up as "Private."  How convenient...

Which family from Azza or Beth-El is homeless and couch-surfing because this Christian couple has taken away its heritage?

Believe you, me. They are not just here to missionize, and they are not going to stop at only one caravan.

"Rabbis" work on "bridge-building" between Jews and Christians, and Israel suffers the backlash. Israeli news agencies talk about "Judeo-Christian Values," even though there is no such thing.

The following video sums all of this up quite well. For written notes on this video, click here.

Thanks for this link!