(from an interview on Channel 99 - the K'nesseth Channel)

Well, at least no one can accuse the Jewish Home Party, formerly known as the National Religious Party (What a joke!), of being right-wing extremists nor religious fanatics.

Seriously, though, more and more I feel that I should change the name of this site from Esser Agaroth (2¢) to Taqlit Shavur (Broken Record).] 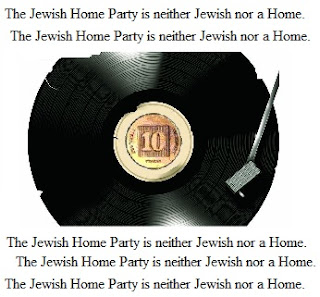 Jewish Home Party Head Naftali Bennett wants to give Israeli citizenship to 1,000 Arabs living in those minimal parts of Yehudah and Shomron (Judea and Samaria), which he wants to annex.

Meanwhile, Prime Minister Netanyahu implements a building freeze in Yehudah and Samaria, and what does Bennett do? He just sits there.

Naftali Bennett either does not understand that Eretz Yisra'el (the Land of Israel) is neither hi, nor Prime Minister Binyamin Netanyahu's, nor Shimon Peres's to carve up and throw to hostile Jew-haters OR to anyone else for that matter.

Yet, the parts of Yehudah and Shomron he does not intend that we should annex, he recommends granting autonomy to those Arabs currently residing there.


In other words, Bennett is sneakily giving away parts of our "Home," our only true "Jewish Home," to those who would wipe us out in a heartbeat.

Changing the party's name to "Jewish Home Party" may reflect the reality that many people considering themselves as living in Jewish homes, are not so Torah observant as they would like to be. Perhaps, the party heads at the time thought that no one would notice.

Bennett, in his role as Minister of Religious Affairs (eyes rolling) wants to step in to save the day regarding the supposed "conflict" surrounding the so-called Women of the Wall, whom I prefer to call something else, something much more accurate.

Save what? The Torah? Or democracy?

Sorry, Minister Bennett, but should know that you cannot have both, "should" being the operative word in this sentence.

And so, in conclusion, I state for the umteenth time, but probably not the last...

The Jewish Home Party is neither Jewish nor a Home.

Discuss among yourselves.
Posted by Esser Agaroth at 12:10 PM

Bennet: "We're trying to strengthen our bonds with Israeli Arabs who are part and parcel of Israel...."

It just gets worse and worse, doesn't it?