Is Sari Raz A Racist? Or Is She Just Stupid?

Sari Raz says she's 'unfamiliar with prominent 20th century Mizrahi poets'; adds: 'We thought about Yehuda Halevi, but were told there was no picture of him'

Sari Raz, a former Channel 1 anchorwoman said on Sunday, "I am really not familiar with prominent Mizrahi poets in the 20th century."

Raz is a member of the committee headed by retired Supreme Court Judge Yaakov Tirkel tasked with choosing Israeli figures to be commemorated on the new Bank of Israel bills.

The committee chose four poets - Rachel, Shaul Tchernichovsky, Leah Goldberg and Natan Alterman to appear on the new banknotes incurring the wrath of Shas party chairman Aryeh Deri, who lashed out at the absence of iconic figures of Mizrahi extraction.

Asked why a Sephardic figure was not chosen to appear on the new bills, Raz replied, "If there was someone predominant figure they would have definitely been added to the list. I am simply not familiar (with anyone), you could say that this committee is ignorant, but I don't really know any outstanding Mizrahi poets from the 20th century who are studied in schools, who youngsters write and learn about or whose words are composed into melodies and sung.

"I am not familiar (with anyone like that) if you are – give me a suggestion. If anybody else knows (of someone) – they should give me suggestions." (cont.)


I have a few questions for Sari, and her fellow "committee" members.

1. So, is it that you could not think of any non-Ashkenazi poets, you were taught about any in your Israeli public school education, or you're just too stupid to think of any? Well, I guess you already answered that one for us above. But, the bottom line is that she does not seem to know of any Mizrahi (Eastern Jewish), religious poets either, from any century!

2. And, it certainly does not seem like the works of any such poets are taught in Israeli public schools. What does THAT tell you about the Westernized Israel we live in?? You know, where non-Ashkenazi children are trained early on

3. Why poets? Were poets decided upon, as a way of keeping out non-Ashkenazi role models, without raising any eyebrows, because people will buy the "there aren't any" line?

4. Why from the 20th Century? Could it be that you wanted to stick with contemporary, secular poets, lest even one child in the Israeli public school system gets some crazy idea to look up a religious poet, and then possibly become influenced by him?? Oy gevalt! A poet from 300 years ago (or 3,000 years ago) influenced my child to learn Torah!

I will tell you why there will not be anyone other than a token, Sepharadi or Teimani Jew on an Israeli banknote anytime soon. Just look at how the secular, Ashkenazi, Labor (non-) Zionists have treated the  and Sepharadi and Teimani Jews  over the years, and that should answer your question. (Click on the link.) 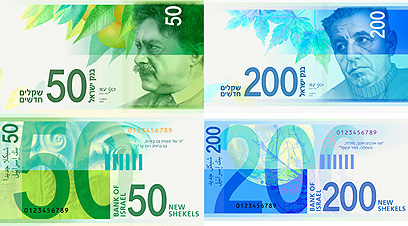 5. Why are the new banknotes so butt-ugly? (Although, I must admit that the combination of blue hues looks kind of cool. But, I digress...)

6. Why isn't even a smiggen of Jewish or Israeli symbolism completely absent from the new bank notes? (Ah! Didn't notice that, did you?) No Star of David, no Menorah, no map (Of course not. Too controversial.), no nothing.

Here's my vote for a new, Israeli banknote:

What do you think, Sari? Does my pick have any chance whatsoever making the final five choices?

Now, let's leave Sari Raz and her "committee" to the side, for a moment. Sari, don't go away. Esser Agaroth has some more words for you!

Why hasn't anyone asked about who designed these butt-ugly monetary notes?! For goodness sakes!

More importantly, why isn't anyone talking about how worthless the New Sheqqel will be soon? The propped up illusion of a strong Bank Of Israel, cleverly propped up by former bank president Stanley Fischer, is only delaying the inevitable. Sure, Israel has all those high tech. parts everyone talks and raves about. And even most Leftists are not willing to boycott (or are in very deep denial that many of their computer and cellular phone parts originated in Israel, in some way, shape or form.)

And, by the way, why isn't anyone talking about how worthless paper or plastic money around the rest of the world as well? Greece, Spain, Portugal, and now Cyprus,...  It's only a matter of time.

Apparently the 10 Agaroth coin (about 2.8¢), after which this site was named, actually costs 12 Ag' to produce. So, it will be of no surprise to you that there has been talk of phasing it out. But, don't thrown them out just yet. Save them! Just think about the copper content. Who knows it may soon be worth more than 10 Ag'. (Israeli Fun Fact courtesy of Rafi at Settlers Of Samaria)

I also suggest to stock up on what is really valuable: food, mainly dried and canned goods, and make sure to have a way to cook them. I know that the one community garden in my neighborhood, along with the "hidden in plain sight" edible plants are not going to be enough to support my neighborhood. What about yours?

Think I'm a nut? A conspiracy theorist? No problem. Just don't come crying to me, when you're hungry, and food is not as accessible as you thought it would be. You'll have to agree with me on at least one thing: You cannot EAT money.

Sorry to write so harshly. Just consider it "tough love."

And now, back to our show "Sari Raz And Friends!"

Sari Raz's score, according to the new and improved, individualized, Esser Agaroth (2¢) scoring system is...

2 1/2 Bozos, because she IS a Bozo, plus one nose-picking Shimon Peres for secular, Ashkenazi elitism.