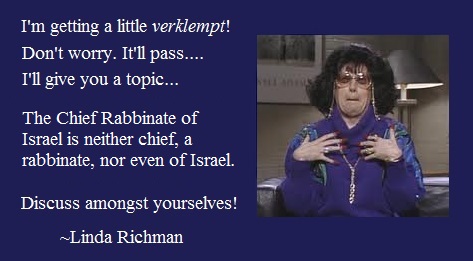 1. The Chief Rabbinate of Israel is not "Chief." Since when does a legitimate chief have strings attached to it? (double meaning,...think about it)

2. The Chief Rabbinate of Israel is not a "Rabbinate." Since when is a supposedly halakhic (Jewish legal) authority chosen through the Hellenistic democratic (or deMOCKratic) process, by a group of individuals who no one knows who they are nor how they were chosen, and which includes those who are pasul for eiduth? (disqualified from giving testimony before a rabbinic court)

And, by the way, where is the real Chief Rabbinate,...the Sanhedrin? I guess no one in the government would ever want such an independent, truly rabbinic authority, empowered to criticize the State, and its "leaders," just as it had the authority to do so to the King.

Instead, we have a body placed in the very awkward position of having to choose whether to criticize its own "meal ticket,..." or not. Mostly not.

3. The Chief Rabbinate of Israel is not a "of Israel." Actually, the rabbinate formed, based on the structure of the Church of England, shmushed on top of the Ottoman Turkish version of liaison to its Jewish community. (Watch and see how!)

B"H - What is incredible, literally, is that "rabbis" legitimate this farce by participating in it. Every observant Jew knows that these State institutions are not the prescribed ones for us on the Land. In our prayers we ask Hashem for our Torah institutions three times a day, yet the moment they come out from their Reform temples they immediately join the kofrim in their risky business.

I almost commented before hearing the last 3 minutes of Rav Bar Hayim's video.

Those last few minutes should have been the introduction of the video. They are critical because almost everything else the Rabbi says makes you assume that even Bedi'avad there is no place or need for the Rabbanut at this time when we have a Jewish national state to manage.

Until the end of the clip, I though Rav Ben Hayim was tossing out the baby with the bath water. So, please learn from my impatience and view the clip in its entirety.

B"H - What exactly makes you think Shy Guy that "we have a Jewish national state"?

Shy Guy, thanks for this comment. You are right. I will try to put up an addendum to this post.

Ariel, whether they are good like David Hamelech or bad like Achav, the State is run (read: owned and operated) by Jews.

I did not say that the State is Jewishly run (read: run in a Jewish manner).

B"H - Of course we can't possibly know what is in G-d's mind. What we do know, because we have His Torah, is what We supposed to do, especially on His Land and to a large degree How we supposed to do it. Now, hopefully you will agree with me in saying that running a democratic, read Hellenist state is NOT one of the prescriptions, therefore we can exclude it from our possibilities with certainty. To say that it’s like Achab is false of course, because Achab run a Jewish, Torah prescribed institutional system. He managed it badly, contrary to Hashem’s will, but the system itself was Jewish: So what we learn from his story is that even a Torah system can malfunction if it is in the hands of evil people. The modern State of Israel is in the hands of evil people, but this does not make it Jewish. It says of itself it is Jewish but this does not have to fool anyone and even less smart and learned people like Rav. Bar- Haim. What makes things Jewish is Torah compatibility and the State, with its knesset, with its supreme court, with its prime minister’s office, etc., is anything but Torah compatible. So we know when it says it is Jewish, it is lying. So, we have to figure out WHY is it lying to us, to its Jews? Once we established it is not Jewish we also may want to figure out what is it then?

Been away a few days.

Ariel, Achav's system was "Jewish"? Anything but! He instituted worship of Baal and Asherah throughout Israel. The only reason he didn't put it in the Beit Hamikdash (like Menashe) was because there was a King in Yehuda and Achav didn't have a chance.

The State is nevertheless run by Jews - both good and evil. There is an obligation upon us to be sovereigns of the land and to remove non-Jewish rulership. This has been done and this is all that I was referring to.

And if it will make you happier if I revise my wording, then: there are still plenty of Jews requiring management of certain aspects of Jewish life in Israel. Again, Rav Bar Hayim says this himself at the end of the video.

B"H - By Jewish I mean the institutions were those the Torah requires us to have, Shy Guy: The king, the cohen gadol, the Temple, the Sanhedrin. The institutions of the modern State are not these, they are the ones the nations have, kneset, pm's office, supreme court and they run these like the nations run theirs: "democratically". Demos means people and cratos power, in Greek. Grece in Greek is Hellas and democracy is intinsicly Hellenistic, not Jewish. Achab was an evil king and run idol worshipping, but his system was Jewish. What we have today is idol worshipping not just in the substance, but even in the form. By the way I read the news today and it seems that Jews are forbidden to the Temple Mount until the end of ramadan. Jewish? Come on! You know this cannot be Jewish! It's just it is very difficult, maybe for some people outright impossible to accept that the State of Israel is a big lie, the way the nations figured out how to rule us and we believed it, because we wanted to, after the Shoa.

B"H - Needed another proof that the State is not Jewish?Here it is!

Also go back and read my 2nd comment here. You will see that we are not arguing as much as you want us to.