What's Another 104 Arab Murderers in the Neighborhood?

JPost: Cabinet approves referendum bill ahead of vote on prisoners release
Herb Keinon, JPost Staff, July 28, 2013
Referendum bill does not include Judea and Samaria; PM scrambles to secure support for releasing 104 Palestinian prisoners as gesture of goodwill; adds vote on Israeli Arab prisoners will be brought to a separate vote.

The cabinet on Sunday approved the draft of a bill mandating a national referendum if an accord with the Palestinians is reached that necessitates withdrawals from part of Jerusalem or land swaps. The bill will be brought to the Knesset for a vote on Wednesday.

"Any agreement, if it is achieved in negotiations, will be brought as a referendum. It is important that every citizen will directly vote on fateful decisions like these that determine the future of the state," Prime Minister Binyamin Netanyahu said during the meeting. (cont.) 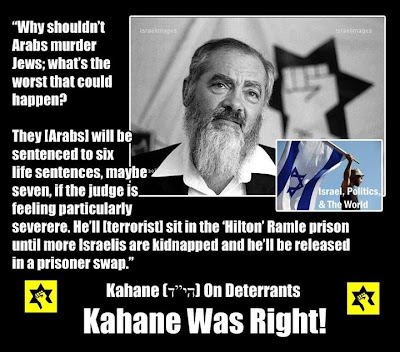 Rabbi Me'ir Kahane hy"d, who was demonized for teaching Torah and authentic halakhah (Jewish Law) and whow was killed by none other that...and Arab over 20 years ago, warned us. But, those in the Israeli government during his time, and after his time, including "Torah-observant" Jews, refused to listen.  Instead, they preferred to keep their seats int he government safe, maintain the trickle of love and friendship begged, borrowed, and whored after, from the goyim, rather than taking the necessary and "unpopular" actions to protect Jewish lives.

And now, according to the text of the Prime Minister's justification speech to Israeli citizens, he talks about taking unpopular actions.

Mr. Netanyahu, it's a little too late for taking unpopular actions. Unpopular actions should have been taken ages ago. Then we wouldn't be in the mess we are now, accelerating on the path of self-destruction.

I am, of course, talking about Rabbi Kahane's unpopular [Torah-based] actions, not yours.

The JPost report above continues with the limitations on the Prime Minister's concept of a "democratic," or in Israel's case, deMOCKratic, referendum.voters will not actually be able to decide on if or what parts of Israel get carved up and thrown to our hostile, Yishma'eli enemies whose goal is our eventual annihilation.

So, what is the referendum for? Prime Minister Netanyahu is going to allow us, through his glorious graciousness, to choose what we should call Yehudah and Shomron (Judea and Samaria). Did you get that? We get to choose what status Yehudah and Shomron should have, while the Prime Minister, and his rubber-stamping cabinet of ministers, actually decide what is going to happen to it.

Does he think that we are that numbed-out, asleep, stupid???

I hate to said it, but sometimes I think that we are,...sheeple (sheep + people) being led to slaughter.

It does not matter what or how much the spineless, Israeli Government gives the Yishma'elim. They are never going to settle for less than...


...ALL of Eretz Yisra'el. Lebanon and Jordan already have some of it, and Syria claims another piece of it for itself.

Some of them are just more patient than others.

I cannot believe that Harvard and MIT educated, Prime Minister Netanyahu is really that stupid to continue on the insane path of "making the same mistakes over and over again, expecting different results."

So, either he really IS that stupid, or he is taking orders from someone else, someone who has been methodically battling the Torah, encouraging the chopping up of our God-given birthright, working to erase its borders, and maintaining the divisions between various groups of Jews, keeping us prisoner in mentality of helplessness, believing that we can do anything about it.

Gee. And who could THAT possibly be?

Anyway, if you think that this is all insane, disgusting, and suicidal, here's the sickest part. These 104 murderers do not include any so-called "Israeli Arabs." The release of those prisoners is still up for debate.

Why is their release even on the table? The Pseudostinian Authority gives a hoot about them?

Of course, they do! They're Yishma'elim, just like them! And how do you suppose that these Yishma'elim identify themselves? As Israelis?

Not bloody likely.
Posted by Esser Agaroth at 10:51 PM