Everything Is Upside Down: Jewish Fear of Arab Riots. Is Redemption on the Way?

Early last Wednesday morning the dead body of an Arab teenaged boy was found in the Jerusalem Forest.

Rumors immediately went flying around as to the cause of the boy's death.

Was it revenge for the murders of Eyal, Naftali, and Gil'ad hy"d?

Fourteen bullets were fired at the boy. Arabs enjoy emptying their cartridges.

Was his death the result of Arab clan wars?

Was his death an anti-gay hate crime? An "honor killing?" Or both? (There never seems to be a gay rights activist around when you need him.)

Shortly after the discovery of the body in the Jerusalem Forest, riots broken in Arab neighborhoods of Jerusalem, Beth Hanina and Shu'afat.


During the rioting, the Arabs not only ripped out train tracks and destroyed their own light rail stations, but the dug up the designer brick work in order to arm themselves against Israeli police. 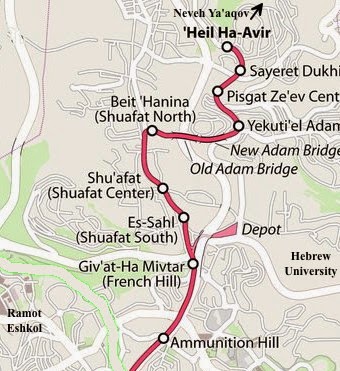 The expected extension of the light rail to Neveh Ya'aqov will now have to be postponed.

Will a new set of tracks bypassing these Arab neighborhoods now have to be built first?

Shouldn't this have been the route built in the first place?

Wouldn't want to appear racist now, would we?

The Arabs received quite a bit of benefit from the light rail. Yet, that did not stop them from demolishing it.

I predict that in a few days, all will conveniently forget that Arabs were responsible for the death of one of their own, and the lie that Jews were at fault for the loss of light rail service to Beth Hanina and Shu'afat will somehow turn into fact.

Meanwhile, the Israeli Prime Minister threatens vigilantes with the full power of the law.

A resident of Rishon LeTzion gets called into the police station for questioning, because he called on hi fellow Israelis to bring Israeli flags to the funerals of the three murdered boys. Not only that, but to convince him to come into the police station alone, he was lied to, told that he was involved in a traffic accident, and had to come into complete some paperwork (Rotter.net).

A 60 year old, Jewish woman was found dead outside of her Pisgath Ze'ev apartment. The news source to report on this incident was the Hotzoloh news site. Mainstream news sources ignore the story.

More Jews were arrested in the last week than Arabs.

The Israeli Government seems more concerned over its image, and avoiding a possible international incident, than over the safety of its own citizens who elected it into power.

Every is upside down and backwards. Ge'ulah, the Final Redemption, must surely be on its way! Please God.

Stay tuned, and don't give up!

Posted by Esser Agaroth at 1:23 AM

We are a very confused, very spiritually sick people.

Let me first say that I am not a Zionist, and I absolutely oppose Jewish revenge attacks on Arabs because I think that they detract attention away from the real enemy (the State, the police, the army and the general Israeli public), but the condemnations coming from what is supposed to be our leadership are the most disgusting thing I have ever seen.

We have rabbi's, media figures and one of the victims extremely loud mouthed mother viscously condemning those who sought to avenge 3 of our martyrs, calling for their execution (I guess it is only prohibited to harm "fellow Jews" when those fellow Jews are themselves destroying Jewish communities) and going even further, saying that there is no difference between and Jewish and Arab terrorist.

Actually, there is a couple of major differences. The first is that Jews are our brothers and arabs are our enemies. And the second goes back to something Binny Kahane once said, "The difference between us is that we are right and they are wrong".

I expect the moral confusion from the rootless leaders of the Zionist state and from the political hacks in Jewish Home, but from our rabbis and from the victims families? Even the normally level headed Feiglin called for the accused to be "harshly punished". Absolutely disgusting.

Well said and good points made.

The reason why I believe the first part of your comment is ok, is because you are not contradicting halakha. Rather you are giving your take on what is good strategy, and what is not.

This is the third time I have been disappointed by MK Feiglin.

Nevertheless, punishment could be mutar, but must be decided by a beth din. And it appears to me that proof that this death caused harm to another Jew or Jews must be shown. I'm not sure. Plus, the death penalty is off the table al pi halakha.

Regarding Zionism, this reminds me of the continual "semantic" debate I have with my good friend Ariel at The Torah Revolution.

On one hand, I don't believe for a minute that those calling themselves "Zionists" are really Zionists, not the mamlakhti "rabbis, and certainly not Shimon Peres and his ilk.

One cannot separate Zionism from the Torah, among other things.

Still another friend says that we don't need any special labels, such as "Zionist." I reluctantly say that he is probably correct.

Could you please give some details about the woman found outside her home in Pisgat Zev. Was this an attack by an Arab? Was she elderly and sink? Was she a young mother?

All I know is that she was 60, and her home was not too far away from the Pisgat Ze'ev Mall where there were some kind of riots.

The Pisgat Ze'ev Mall is a center of battles between Jewish and Arab youth, often to prevent Arabs from hitting on Jewish girls. Of course, these Jews boys get in trouble for what the Jewish "powers that be" should be doing.

If you can read the rail, you can see how close the Arab neighborhoods are to the Pisgat Ze'ev Mall. Now that train service has been suspended indefinitely, instead og taking the train into town, how much do you want to bet that there will be more Arabs at this mall?

I was told by a reliable source who follows Hebrew and religious news sites that the only site with information about this woman was the Hotzoloh website. It apparently included a photo of her being carried away.

If somebody is against the attacks I have no problem, I myself am against the murder of Arab civilians, at least at this time.

I will go even further and say that even being against the attacks for purely moral/halachic reasons is within the bounds of legitimate disagreement, even though I view such a position to be about as mistaken as is possible.

However, if somebody is against the murder of Arabs by Jews they are obligated to make it clear that A) the Jewish "murderers" hearts were in the right place and B) that Jewish terrorism is not the same as Arab terrorism, because justice is on our side.

There is a saying that "you get the leaders you deserve", and usually that is true. Certainly the Israeli public has deserved the Rabins, Sharons, Olmerts, Livnis and Netanyahus it has received, but what about us real Jews? Do we deserve men like Bennet, Rav Lebanon and the others who have adopted western/Christian morality? I don't think we do.

As for Feiglin, he hasn't claimed that the revenge killing of the arab was as bad as the murders of Jews but he has condemned it whereas in the past he refused to condemn Jewish terror attacks. I'm disappointed but I still respect him and at the very least he hasn't gone as far as Ms. Frenkel or Rabbi Lev.

No arguments at all with any of the above.

Interesting thought about our "leaders."

1. We do "deserve" them because this is still our Western mentality.

2. We deserve them because many of us still see the Knesseth as not only the means but the end. Instead of revamping it, many just want to wait around for Mashi'ah to arrive and then do all of the work which we could have done already.

3. We deserve them because we allow such individuals to "lead" us.

This is a slight change of subject, but I think it is important to make it clear exactly why Bibi is not attacking Gaza.

The situation is much different than it was during Cast Lead and Pillar of Defense. In both of those cases Hamas had something to lose and it was Hamas that was behind the rocket assault. The point of both operations was not to stop the rocket fire, but rather to give Hamas such a beating that THEY would stop the rocket fire. This is in accord with how Israel has dealt with arab terrorism since the founding of the State and while this policy of what journalist Steven Plaut has termed "controlled carnage" can be criticized, it has generally proved to be effective overall.

The problem is that today Hamas is being strangled by Egypt and Gaza is rapidly approaching "failed state" status. Tough times are causing divisions within Hamas itself and Hamas likely no longer has the strength or will to enforce a full ceasefire. In short, the normal IDF strategy of beating up Hamas until they agree to do the IDF's dirty work is no longer viable in the situation.

On the other hand, the IDF can't attack Gaza either because if it were to do so it would bring about the collapse of Hamas rule in Gaza to be replaced by total anarchy. Since Egypt categorically refuses to re-assume control over Gaza, that means that if Hamas goes the IDF will have no alternative but to re-occupy the Gaza Strip and re-establish the civil administration. And I am being totally serious when I say that the government, the IDF and the Israeli public would prefer to see Sderot and Ashkelon both blasted to rubble than to re-occupy Gaza.

I am afraid I will have disagree with you here. The gov't was effective in 1967, but since then?

They always do a half ass job, because the Arabs know that eventually the international community will call Israel out and force them to stop, giving the Arabs time to regroup.

More force is required, and in more ways than one.

BTW, there is a story about Gaza. Begin suggested that Sadat take Rafi'ah, but he only wanted half. He said this is Egyptian Rafi'ah; that isn't. We don't want that.

Even the Egyptians don't want anything to do with "Palestinians."

Ah but 1967 was a real war, not an anti terror operation.

Today, when the arabs can't even stop terror against themselves, let alone against the Jews, that strategy is no longer viable so the IDF has no idea what to do.

I think that they do know, but are not allowed from implementing a successful strategy.

The Erev Rav controlled government does not want unity, nor a Jewish (ie. Torah) State, nor even proper borders.