The missile warning siren went off in Jerusalem, a few minutes before 10:00 pm.

Here is the timelime according to YNET: I have highlighted what I believe to be particularly significant, and provide commentary below.

Kerem Shalom residents instructed to stay in homes for fear of terrorist infiltration
(20:57 , 07.08.14)


Yeshiva World News
(22:17) One rocket hit a building in Beit Shemesh. One exploded in the Jerusalem area. Explosions were heard in the [Downtown Jerusalem neighborhood of] Nachlaot area. There appears to be damage in Ashdod and Beersheva too. B’chasdei Hashem it there are no reports of fatalities or serious injuries. (live updates)


Esser Agaroth (2¢):
Well, it appears that we are at war. At least that is what a normal human being would. But, whoever said that the Israeli government was made up of normal human being. Self-destructive I would have to say.

Will people finally wake up to the fact that Arabs consider Tel-Aviv just as much fair game as Hevron Beth El or Yitzhar?

On the other hand, it would not surprise me if it was discovered that one or two missiles were "accidentally" let through, speculating on just how much sympathy from the "International Community they could garner. 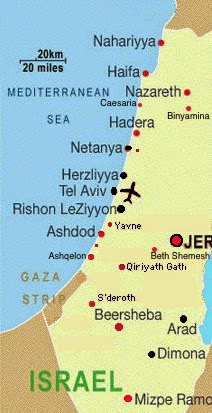 In this map from January, 2009 (left), we can see that certain cities still have a perceived sense of "safety."

Not anymore. The map on the right shows those additional cities now threatened from the south.

These cities threatened by Gaza in the south do not currently include Nahariyya nor Nazareth. But, what happens when they rockets start launching from the north, from Lebanon and no doubt from Syria, once militants there get their acts together?

Simply put, there will be nowhere to run,...except for maybe out of Israel. (May God Prevent emigration!)


Perhaps the rockets will be part of the filtering out process. (May we all wake up, do teshuvah and merit to remain in Israel!)

Today I even heard stories of tour groups cancelling their reservations, and families making plans to leave.

And these were before today's barrage on the southern and central parts of Israel. Rather these decisions were attributed to the Arab riots, which have been spreading around Israel, during this Muslim month of Ramadan.

Then, of course, there are still troubles in South Tel-Aviv, with the so called "refugees" thieving, trashing, assaulting, mooching, you name it.

And what about Iran? I mean Iran is still right where it was a few months ago, right?


Dare I mention the hidden, and not so hidden, threats: The Bedouin, the Black [non-] Hebrews, the Christians flowing it from the U. S.  and elsewhere, the U. S. Secretary of State itching to get some of their troops on the ground here, not to mention the latest wannabe Caliph and his crew, somewhere over in Iraq or Syria.

Well, I certainly do not intend to leave Israel, regardless of the current situation.

How could I, with the possibility of Ge'ulah playing out before my very eyes?!

Stay tuned for some more connecting of the dots!
Posted by Esser Agaroth at 12:42 AM

Just as predicted, in each of these wars the Arabs have better equipment.

As long as the south is under bombardment, our brothers in Judea and Samaria are safe from expulsion.

If the IDF defeats Hamas, it will turn its sites on destroying Judea and Samaria's Jewish communities (which is what it is actually designed to do in the first place).

Billy, Maybe. I agree with your suspicion of the gov't's motives.

I think it's worse than you state here.

Please leave you email address in your next comment, which I will not publish.

Is Billy saying that the IDF are expected to destroy the Israeli communities in Judea and Samaria?

Perhaps, but I'll let Billy answer for himself.

The IDF has already been involved in such expulsions, as you know.

For years, I have speculated on the use of foreign troops in expelling Jews from the homes and lands, especially with the acknowledgement that expulsions by the IDF were highly traumatic on the soldiers.

With John Kerry's proposal for U. S. troops in the Jordan Valley, this theory lost its conspiracy status overnight.

My other theory is that the Yassam (riot police) will be brought in. Many are not Jewish, and love to break heads.

They will take out Yitzhar or another town overnight without any warning.

Then, the residents of several towns will just get up and leave on their own, saving the Israeli gov't lots of money.

I'm not sure how to leave my email, as requested. I'm using my google account so I thought that puts the email on automatically.

Anyway, historically it has been the case that a "strong" Israel means expulsions of Jews. The IDF's victory in the First Intifada led to Oslo and Operation Defensive Shield led to the expulsion from Gush Katif. On the other hand, the IDF's defeat in 2006 in the war against Hezbollah derailed Olmert's planned expulsion of the Jews in Judea and Samaria.

Just write it in the comments. (if you don't mind).

But, I won't publish it, so no one else will see it.

No, Google doesn't automatically allow me to see email addresses.

What we have perceived as a strong Israel has led to expulsions.

I blame the state's puppet rabbis for their silence.