It's Broken Record Time: Jews! Get Out Of France! (Updated) 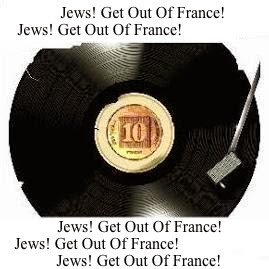 Times Of Israel: Hundreds trapped in synagogue as Paris protest turns violent
Thousands gather in Paris to demonstrate against Gaza operation, hurling stones at house of worship
By AFP and Times of Israel staff July 13, 2014

PARIS — Clashes erupted in Paris on Sunday as thousands of people protested against Israel and in support of residents in the Gaza Strip, where a six-day conflict has left 166 Palestinians dead.

Several thousand demonstrators walked calmly through the streets of Paris behind a large banner that read “Total Support for the Struggle of the Palestinian People”.

But clashes erupted at the end of the march on Bastille Square, with people throwing projectiles onto a cordon of police who responded with tear gas. The unrest was continuing early Sunday evening.

Media reports said that hundreds of Jews were trapped inside a synagogue in the area and police units were sent to rescue them.

A person in the synagogue told Israel’s Channel 2 news that protesters hurled stones and bricks at the building, “like it was an intifada.” (cont.)

Esser Agaroth (2¢):
Like an intifada? Perhaps. Try siege. It is much more specific.

During this very month, the Fourth Month or "Tammuz," almost 2,600 years ago, and then again 1,934 years ago, the ancient city of Jerusalem lay under siege, first by the Babylonians, then by the Romans.

Nine years ago, in the next month of "Av," the Expulsion of Jews ended with last stand by Rabbis Dov Lior from Hevron-Qeriyath Arba and Zalman Melamed from Beth-El, along with many young Jewish men and women, on the roof of the synagogue in the now Judenrein town of K'far Darom in Southern Gaza.

If you are going to be subject to a siege -- and do not think that this will be that last one, nor that the police will be infallible with their rescue efforts -- then you really should be in only true, Homeland, the Land of Israel, and where you will actually have a chance at survival.

After killings and beatings and assorted threats, it is time to take the hint already.

Just pack your bags, and get on the plane!

Update: Maybe you are getting the message! 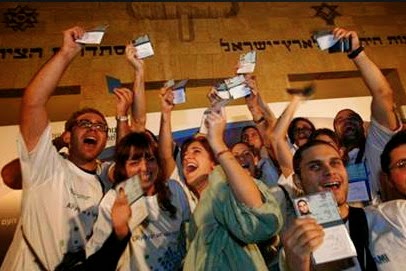 Some 400 French Jews will be making aliyah to Israel Wednesday, undeterred by the ongoing rocket fire and conflict with terrorist groups in Gaza. (cont.)
Posted by Esser Agaroth at 12:12 AM