Israel's Northern Border: What the Hell is Going On?

Does anyone have a clue as to what's going on, on Israel's northern border? Because I sure as hell do not.

(*If you are a news junkie, then you can check out Yeranen Ya'akov's collection of related links.)


At least 7 wounded, including soldiers, from Hezbollah fire in north
01.28.15, 11:51: IDF respond with fire after vehicle hit with anti-tank missile not far from Har Dov, additional fire hits Hermon shortly after - a day after IAF responds to Hezbollah rocket attack against Israel. (YNET)

Netanyahu: Those behind deadly border attack will pay the price
01.28.15, 20:24: PM says 'IDF is prepared to act strongly on all fronts'; defense minister says 'we will respond forcefully and with determination'. (YNET)

And now, what is the prime minister doing? Nothing.

The following report appears to cover all of the bases. Still, something (I don't know what) seems to be missing...


For both Israel and Hezbollah, calm works for now (YNET)
01.29.15, 00:56: Analysis by Ron Ben-Yishai: Hezbollah is not in a position to carry out a massive revenge attack for the killing of its senior officials on the Golan last week, and in Israel, political considerations take center stage. 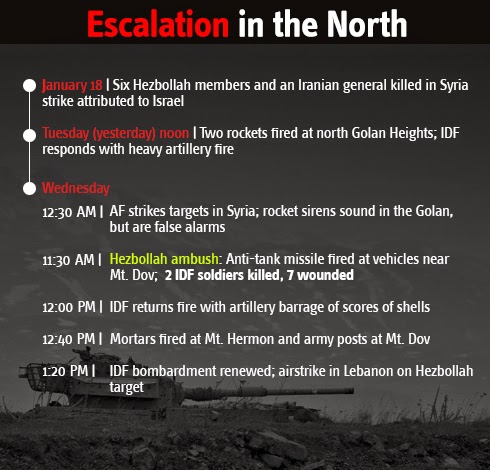 Hezbollah is clearly signaling a message that it sees its score with Israel has been settled. The ambush Wednesday morning that killed an IDF fighter and an officer and wounded seven soldiers is, by all indications, retaliation – and a suitable response in its view – for the killing of its senior officials and an Iranian general (Jihad Mughniyeh) last Sunday on the Golan Heights.

Hezbollah is worried that Israel would respond with force the attack on its soldiers, destroy its vast missile system and impair the organization's ability to act as a strategic long arm for Iran. The Iranians have warned Nasrallah that this cannot happen.

Therefore, the Hezbollah chief has been issuing conciliatory messages via every possible channel. And now, the ball is in the Israeli court. Prime Minister Netanyahu, Defense Minister Ya'alon, the chief of staff and his deputy are actually the ones who decide what happens next. They face a difficult dilemma: If they deal a major blow to Hezbollah in Lebanon, the result would probably be a total conflagration, probably the Third Lebanon War. (cont.)


If the present government decides on a harsh response that would trigger a major escalation, it would almost immediately be accused of dragging Israel into a political war designed to serve the ends of Netanyahu, Avigdor Lieberman and Naftali Bennett.

Maybe I am just a jaded, ol' veteran immigrant, but I have long ceased giving government officials the benefit of the doubt. Netanyahu's potential exploitation of this conflict came to mind almost immediately, especially with the upcoming, March 17th elections.

In fact, I pretty much assumed that if this was not some kind of ploy, then it must have been implemented in order to distract the public, and divert its attention away from something else, something he did not want us to notice.

This is an all too common tactic employed in the U. S.

Of course, Prime Minister Netanyahu already provided his spin on the situation, fairly early on in the border conflict...


Israeli officials blame Iran for northern border attack
01.28.15, 15:30: Netanyahu on Lebanon attack: I suggest those trying to challenge us in the North look at Gaza. (JPost)

“Iran is behind this heinous terrorist attack. The same Iran which the world powers are forming an agreement with, that would allow it to maintain its ability to acquire nuclear weapons capacity,” the sources said.

This is the same Iran that tried to build a terrorist infrastructure in the Golan Heights, similar to what it has in Syria, Lebanon, Gaza, Iraq and Yemen, the sources said.

This is the same Iran that supports terrorism around the globe, the sources said.

Unsurprising, and completely lacking in creativity. It's just too boring to be a political ploy. Were these words really designed to garner sympathy from the West? That same ol' tactic which has never worked?

And what was that part about Gaza? A joke? Hamas forces are rearming and doing push-ups, as I write. Israel never finishes the job, and the Arabs know this all too well.


Israeli UN Ambassador Not Invited to Discussion on Attack
1/29/2015, 9:10 AM: The Security Council conducted a discussion of the attack on IDF troops in which a Spanish peacekeeper was killed as well. (Arutz 7)

No surprise here. Nor is it any surprise that the Spanish Ambassador blames Israel.

So, if known terrorists, seeking the destruction of all Spanish people, were roaming along the borders of Spain, doing reconnaissance, you would just let them? Yeah, right!

A few hours after this, maybe the prime minister is doing something after all, or thinking about it. 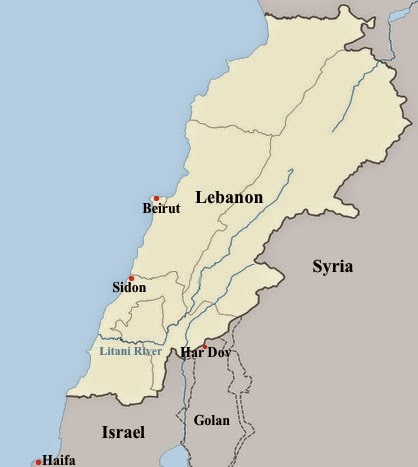 As you can see, Sidon is pretty far north of the border. What the hell were they doing up there??

Incidentally, according to most opinions, the borders of the tribal territories of Asher and Naftali (ie. Eretz Yisra'el) run at least to the Litani River. However, I will not hold my breath for a possible reconquest. We suffered enough disappointment in 2006/תשס״ו.


Meanwhile, in Washington, DC, the back and forth continues over Speaker of House John Boehner's invitation to Prime minister Netanyahu to address Congress. The White House feels snubbed (Boo-Hoo!), and both Boehner and Netanyahu play dumb, feigning ignorance of what problem U. S. President Obama could possible

Personally, I believe that Boehner is just using Netanyahu to drum up some publicity, to mend some of the bridges burned between himself and the generally pro-Israel, conservative Republicans who tried to oust him from his position as Speaker. I am sure that Boehner is also quite happy to exploit this opportunity to respond to Obama's overstepping of his authority and slighting of the Legislative Branch more times than can be counted, sending the message that "two can play at that game."

But, of course, Netanyahu is allowing himself to used. It takes two to tango.

President Obama is certainly no fan of Netanyahu. Rumors having been flying, that is, if he doesn't get us all killed in some nuclear holocaust because of his idiotic strategies of "diplomacy" toward Iran. No, not naivete, idiocy. There is no way that this president is calling the shots, even in his own country. No way.

The only thing I am sure about, is that The Holy One, Blessed Be He, is on our side, and watching out for us.


Unfortunately, if we do not acknowledge that He is on our side, and start doing our part, we may have to incur some proverbial kicks in the pants, until we have His full and undivided attention.

Heaven help us.
Posted by Esser Agaroth at 9:03 PM