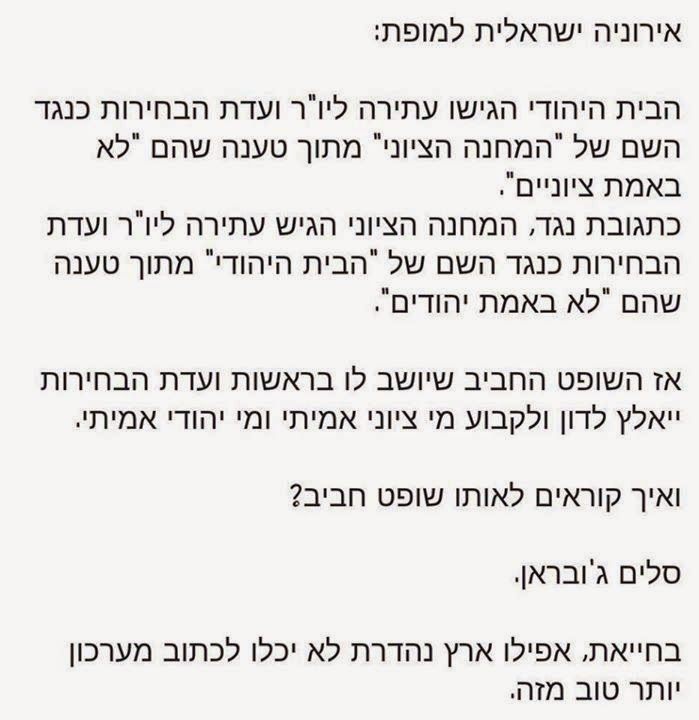 Esser Agaroth (2¢) Translation:
"I don't know who wrote this text, which made its way to me in some round about way. I also did not bother to check its reliability - because in reality it doesn't matter. Read and you'll understand:"

The Model of Israeli Irony:

The Jewish Home Party submitted a petition to the Chair of the Elections Committee against the name of "The Zionist Camp" claiming that "they are not really Zionists."

In response, The Zionist Camp submitted a petition  to the Chair of the Elections Committee against the name of "The Jewish Home" claiming that "they are not really Jews."

So the beloved judge who sits as the Chair of the Elections Committee will be forced to rule on and to determine who is a real Zionist, and who is a real Jew.

And what is the name of the beloved judge?

Even "Eretz Nehederet"* could not have written a better skit than this.

This is how low we have sunk, in the name of "being just like everyone else."

Multicultural, politically-correct, pluralistic. And we are proud of this?

The truth is that not only is the "Zionist Camp" not really Zionist, and the "Jewish Home" is not really Jewish, but when you think about it, is the State of Israel either Zionist or Jewish?
Posted by Esser Agaroth at 8:05 AM

Great post. I wanted to write something on this but never got around to it. Thank you for doing so.