Oh, I know that I am probably going to get into trouble for this, one way or another, assuming that Mark ever sees this, and bothers end up reading it, which I seriously doubt. Disrespecting a brother in public is a big "No-No," albeit not my intention to do so. Since Mark is a brother, I will do my best to put this as nicely as I can.

Nevertheless, I do believe this issue is important enough to warrant an open letter to founder of Facebook Mark Zuckerberg, brother or not.

That being said, I am also certain that many Jews will get on my case for not being strong enough in my calling him out for his recent statement on "extremist."

If I have taken his statements out of context, then by all means, let me have it. This was what Mark Zuckerberg (or his staff) posted on his own Facebook page, January 9, 2015, which was swiftly picked by the usual social media transportation devices: 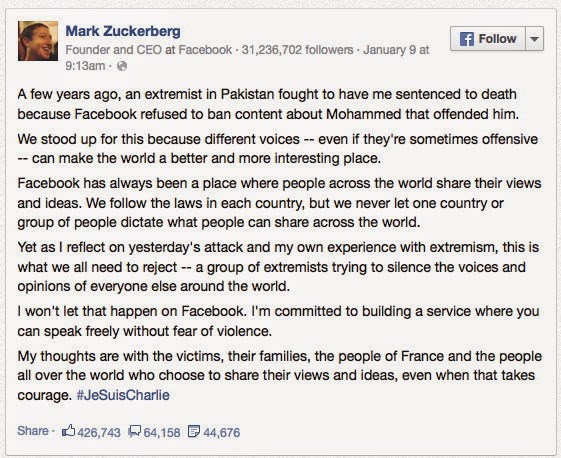 Let me share an experiment with you. Those of you with Internet savvy probably have some experience with Google Translate. Although I appreciate this tool, and it has been getting better, it is far from perfect, even with languages closely related to each other.

Sure, some of U. S. President George W. Bush's famous last words included, "We don't have enough Arabic translators." and this was one of the few times that he was right (Ahem!).

However, using Google Translate can provide us, including Mark Zuckerberg and his staff, with enough information to know if a particular Facebook group is connected to an "extremist" group. It even provides definitions below, confirming the proper use of the words and phrases entered.

Here are some examples. Just spell "Hamas" in English, translate to Arabic, and then translate the Arabic back into English. Copy this word and search for on Facebook, and see what comes up.


حماس = Hamas
A Palestinian Islamic movement founded in 1987 with the aim of establishing a Palestinian state incorporating present-day Israel and the West Bank. In 2006 Hamas defeated the more moderate Fatah in the elections for the Palestinian National Authority.

حزب الله = Hezbollah
An extremist Shiite Muslim group that has close links with Iran, created after the Iranian revolution of 1979 and active especially in Lebanon.

Apparently, ISIS and ISL are too new for a definition. Or if the absence of a definition popping is a result of an error in spelling after all, well, then you still have three more groups above to use in your searches.

Sure, your search results will invariably include those set up as anti-terrorist groups and pages. But, these can be weeded out with a quick translation of the title.

See for yourself just how many come up on your searches.

Why can't Zuckerberg's team uncover these as easily as we can?

Now try searching in Hebrew, or even in English, for so-called "extremist" groups. I doubt that you will find too many of them, not to mention the double standards when it comes to defining what is, or is not, an "extremist" group.

Debbie Schlussel is one of several writers who have reported on the application of double standards on Facebook, including their own personal experiences with Facebook censorship. I recommend that you check out her site.

There are plenty of misguided, Jewish leftists, both English and Hebrew speakers, ready to jump on anything they find to be even remotely threatening to their assimilated, anti-Torah ways of life. Some of them may even get paid to sit in front of their computers screens, and search and report any group, page, forum, or comment, they find to be offensive to their Western exile, assimilationist sensibilities.

In fact, one theory has suggested that a certain "peace center," which shall remain nameless for now, employs such individuals to do just that, as well as making certain that enough comments which reflect their view can be found on every news item.
Now, let's hope that the Esser Agaroth Facebook Page is still where I left it, after Shabbath.

Oh, yeah, and please don't hesitate to "like" it.

This post is among the many that have been included in Shiloh Musings: Havel Havelim, וָאֵרָא Va'era, And I Appeared.... this week's edition of the international Jewish bloggers carnival, a weekly round-up of interesting and varied posts.

Please look at the other posts, too, comment and share. Also, you're invited to get more involved in our blogging community.

Shavua Tov, Have a Wonderful Week!

B"H - I think it is unethical of a certain frequent host to queen on Havel Havelim, to suffocate it with her over-activism, to use it to shamelessly promote her own blog and to repudiate people from there like myself who dare to express their opinion not conforming with her's. Esser Agaroth, you shouldn't thank her for editing in your post, right on the spot by the way as usual: She should thank you for providing her with brilliant and professional free content for her unethical little Zionist power-grab game there.

Forgive me for my residule Americanisms...

In California, it is said that "Any publicity is good publicity."

The New York version is "No publicity is bad publicity."

So, if she wants to put in my post, fine. It's always been the policy of HH to stick in a plug with the link either by the poster or the hoster.

For my part, I can't complain.

But, yeah, I don't the double standards in which I believe you and I were both treated.