May God Bless and Keep the U. S. Government,...Very far away from Israel!


The following report is being hailed as something positive. The fact that is does not have a chance in hell of passing votes in Congress, let alone being signed into law, is irrelevant.

WASHINGTON — Senators Dean Heller (R-NV) and Ted Cruz (R-TX) ushered in the new Congressional session by proposing legislation Tuesday to force the Obama administration to change longstanding US policy and move the US embassy in Israel from Tel Aviv to Jerusalem.

The bill, which stands little chance of surviving both Congress and the presidential veto pen, nonetheless represents the opening shots from a newly Republican Congress that has vowed to challenge presidential authority on key foreign policy questions.

It also comes as the Supreme Court readies to rule on a high profile case which could determine Congress’s ability to shape foreign policy and force the State Department to change course and recognize Jerusalem’s status on passports of Americans born in the city.

The Jerusalem Embassy and Recognition Act of 2015 seeks to force the executive branch to uphold the Jerusalem Embassy Act of 1995, which calls for the relocation of the embassy from Tel Aviv to the Israeli capital, but has been pushed off by pro forma presidential measures since.

“Almost fifteen years ago Congress passed the Jerusalem Embassy Act of 1995 with overwhelming bipartisan majorities in both the House and Senate,” Cruz, the bill’s cosponsor, wrote in a statement Tuesday. “It is my hope that members of Congress on both sides of the aisle support this important bill. It is long past due for our government to finally and unequivocally recognize Israel’s historical capital both in word and deed.” (cont.)


A nice sentiment, right? Well-deserved validation of our Divine claim to Jerusalem and surrounds, right? This will only help us to gain full control over Har HaBayith (Temple Mount), right?


...The bill is co-sponsored by Cruz, a Tea Party Republican thought to be a main contender for a GOP presidential run in 2016 and it is one of the first attempts to use the new Republican-controlled Congress to challenge Obama’s foreign policy decisions. In the coming weeks, a number of legislative initiatives are likely to attempt to shape foreign policy...

On one hand, Israel is simply being used as a tool in the ongoing battle between the Legislative and Executive Branches of the U. S. Government, and between the Democrats and Republicans. Of course, this is all an illusion of adversarial relationships. Other than a handful of "social issues" and arguments overa money distribution and economics, is there really that much of a difference between these two parties?

We have got Jew-hating/Arab (Yishma'el)-loving, "liberals" (Esau) and their assimilated, co-dependent, Jewish sidekicks, desperate for existential validation and love on one side, and conservative Christians (also Esau), who want to be our "friends," with their enamored, Jewish lackies on the other.

Either way you slice it, Americans from this group or that want to control Eretz Yisra'el (Land of Israel).


...Supreme Court challenge The anticipated battles over which branch of government has a say in determining foreign policy are not restricted to Pennsylvania Avenue. In the coming months, the Supreme Court is expected to deliver a long-anticipated ruling in Zivitofsky v. Kerry, in which the current policy of not writing “Jerusalem, Israel” as a place of birth in US passports is challenged.

The Supreme Court case, which originates in a request by the parents of Menachem Zivitofsky to write “Israel” as the place of birth in their Jerusalem-born son’s passport, is popular among court-watchers for its potential implications for Congress’s role in shaping foreign policy.

Although a narrow ruling that does not have sweeping implications for the shaping of foreign policy is expected, it is still possible that the Supreme Court could attempt to swat down attempts like Cruz’s to change the State Department from outside...

Although I applaud the efforts of the Zivitofskys, fighting on the side of truth, and bringing this truth to the attention of the world, why should we care what the U. S. government thinks of us?

According to the report in Yediot Aharonot, the plan is to employ the Palestinians mainly to escort convoys of American diplomats in Judea-Samaria.

This is a breach of an agreement between the Consulate and the Israeli government, signed in 2011, whereby only guards who served in combat units in the IDF who are employed by the consulate will be allowed to carry arms.

The report said that the change in the consulate Israelis began months ago, with the appointment of consulate security officer Dan Cronin. Employees say that since they started working there seven Israeli security guards were fired, compared with one Palestinian guard.

Employees who were employed at the consulate blame Cronin for blatantly opposing Israel and expressing pro-Palestinian statements.

"The law in Israel is only a recommendation for him," one employee fired. "Cronin does whatever he wants."

According to them, some of the Palestinian security guards employed at the consulate were arrested in the past for throwing rocks or have relatives who were convicted of hostile terrorist activities.

"The Consulate head's behavior tends toward the Palestinians, and Cronin actually established a Palestinian armed militia for the Consulate," an employee said. "He is training them with weapons, combat and tactical exercises. There is a lack of responsibility here - who ensures that such weapons, once given over to Palestinian guards, won't make their way to terror groups?"

The anti-Israeli character of the consulate today is clear, according to the report: the most senior adviser is a Palestinian Arab, Ibrahim Delalsh, who sat in Israeli prison for belonging to Fatah-linked terror groups. Another advisor is a relative of one of the leaders of Hamas in Jerusalem, Muhammad Hassan Abu Tir, who has been in and out of Israeli prisons many times.

While diplomats at the Consulate live in Jewish areas of western Jerusalem, they consider themselves "American Ambassadors in Palestine," according to the report. Its armored vehicles often move to and from Judea and Samaria, its people have contacts with the Palestinian Authority and it takes part in surveillance over construction of Jewish communities in the region.

The Consulate said in response: "The US Consulate General in Jerusalem has full confidence in the professionalism of its staff. We do not discuss the security of our diplomatic mission but note that there are many inaccuracies here. In addition, we coordinate our work with local authorities to the fullest." (cont.)

"We don't really give a damn! We're the U. S. Government! We'll do whatever we want!"

And we still do not have any answers as to what happened two weeks ago, when U. S. Consular officials failed to coordinate their "visit" to the Shomron (Samaria) with Israeli Defense Forces [IDF]. "Coordinate our work with local authorities to the fullest," indeed!

They are already dangerously close to Israel in their dealings with ISIS. Whether they Israel in Gog u'Magog fashion (with or instead of Russia or other foreign invaders), or be invited in with open arms by the Israeli Government, only time will tell.

U. S. Secretary of State John Kerry announced that he would like to place U. S. troops in the Jordan Valley, something which I have been writing about since 2005.

It is no secret that the U. S. State Department in particular has been the bane of the Jews and Israel's existence, since 1948, when it recommended to then President Harry S. Truman against recognizing the State of Israel.

Actually, even before that, Jewish refugees fleeing Nazi ridden Europe, were turned away from U. S. shores. The answer to the question as to why, has still not been answered to my satisfaction. The only answer I ccn come up with is the politically-incorrect answer of Jew-hatred. 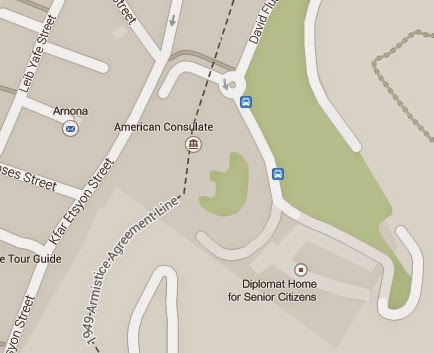 Isn't it odd that the U. S. Consulate is not on the west side of the 1949 Armistice Line, nor on the east side of it, but rather right on top of it?

Talk about playing both sides of the fence, and I mean that literally.

Whether planned as a command base for reconnaissance, intelligence gathering, and U. S. troop movements, which according to some, it already is, or the future U. S. Embassy in yet another Arab terrorist state, its chosen location is just too uncanny.

Of course, we Jews will eventually have the last laugh. Now, if we can only bring ourselves to stop accepting financial support from the U. S., that laugh might come just a little bit faster.

VERY FAR AWAY FROM ISRAEL!
Posted by Esser Agaroth at 9:09 PM