Elnaqam, one of the hilltops adjacent to K'far Tapu'ah Hill was torched Sunday night, and the police aim to complete the pogrom:

Elnaqam 4: One year ago
Sunday night the Tapu'ah Response Team and volunteer fire dept woke up to a horrible fire on the Tapu'ah hilltop known as El Nakam-4. The last remaining tent that housed a Torah study-hall, dormitory and dining hall for the small unique canine yeshiva was torched at approximately 3:00 AM. Miraculously, no holy books were damaged and nobody was harmed in the fierce fire, which is believed to have been started by gas firebombs tossed lit into the tent. 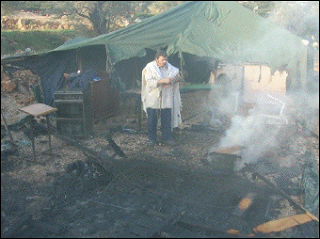 Elnaqam 4: Yekutiel Ben-Ya'akov praying early Monday morning
Firefighters controlled the blaze by 4:00 AM and military trackers were unable to find conclusive signs or direction of the fleeing arsonists.

The entire hill has been slated for destruction by the IDF Central Commander Gad Shamni like most other "illegal" hills in Judea and Samaria. The police were scheduled to tear down the remaining tent at 6:00 AM and to seal the area off. The forty specially trained canines that were kept and/or trained on the hill were removed several weeks ago, after the Administrative Closure Order was leaked out early to the directors of the Canine Yeshiva program. Clearly, it was this horrible breach in security that enabled the terrorists to sneak on to the hill and carry out their attack.

"I wonder if Shamni will still send his troops to confiscate the ashes he has brought about of our once thriving hilltop. If it was not sad it would be comical. Our dogs and students have saved countless lives in Israel. We will continue to do so.

How many Jews will Israeli leaders continue to sacrifice to appease the international community? How far will Shamni and Olmert go to strip Jews in Israel of any basic right or tool of self defense against pogroms like the ones we are seeing here in Israel these days?"

Or send a generous check now to help rebuild:

Cross-posted on the B'nal Elim Blog
Posted by Esser Agaroth at 1:45 PM