Jacob Da Jew tagged me with the "Super Power Meme." He says he tagged me "'cause the West Bank is the new Wild Wild West and a Superpower sure would come in handy."

Here are the rules of this meme,...which I, in typical Esser Agaroth fashion, will bend, break, and destroy, one by one.

1: Write one superpower you would like to have and what you would do with it.

2: Write why you chose that super power over everything else.

3: Tag and link lots of people, and write why you think they will have an interesting meme.

So, which super power would I like to have? Well, that all depends. I'll break it down into themes.

If I were a member of the Justice League of America, I'd want to have the power of the Green Lantern's power ring. 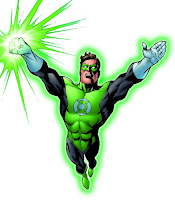 The power ring's most distinctive effect is the generation of green, solid-light constructs, the precise physical nature of which has never been specified. The size, complexity, and strength of these constructs is limited only by the ring-bearer's willpower; whatever the wearer imagines, the ring will create. No hard upper limit to the power ring's capabilities has yet been demonstrated and it is often referred to as "the most powerful weapon in the universe."

Do I really need to provide an explanation as to why I would want the powers of a ring which is limited only by whatever the wearer imagines (...and the color yellow)?

Now, if I were to choose from the super powers of the X-Men, one of my favorite series, I choose either the telekinetic abilities of the Phoenix or the shape-shifting abilities of Mystique. It would be way cool to be able to move anything around, including myself or to shape-shift into any appearance.

But, the truth is that the one super power I would really like to possess is magic, like in the wizarding world of Harry Potter. Or, as Jacob Da Jew might phrase it... 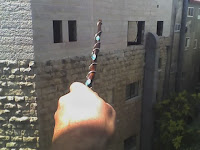 It's all in the wand, baby!

I don't know if Jacob, or the originators of this meme would count this as a super power, but so what.... I'll do what I want. And, if I had Harry Potter's magic, I really could do what I want.

As most of you, know, I do not like to hassle people with tags. I'll just make a few suggestions, going back to the Justice League/Super Friends theme.

Rafi is more of a long-distance runner than a sprinter, but perhaps could be seen as The Flash anyway.

I could see Batya or Lisa as Wonder Woman. (Rumor has it that Lisa is an avid comic book reader, too.)

I have it on good authority that Ron (AKA: The Hashmonean) likes powerful vehicles. I could see him feeling quite comfortable behind the wheel of the Batmobile, souped up with loads of gadgets, mowing down a terrorist or two. I actually see him more as Robin that as Batman. The honor of being Batman gets bestowed on Nathan of Lines Writing Lines. You're both in Tel-Aviv, so that'll be convenient for you to work together. Have you even met, yet? I think you might get along. I'm pretty sure, anyway.

Jack's leadership skills make him suited for the role of Superman, the proverbial head of the Justice League/Super Friends (AKA Super Bloggers). Plus, as an abba (dad) , I'm sure a super power or two would come in handy (eg. x-ray vision, superhuman strength, superhuman speed, flying, etc).

I could see Bar-Kokhba as Aquaman. Don't ask me how I came to this conclusion. It's a secret.

Eric at The Israel Situation would make a good Hawkman. "Why?" you ask. Why not? He's in Colorado,...lots of peaks and mountains. Being able to fly would certainly come in handy.

I wonder if Material Maidel would make a good Bat Girl. Let's ask her.... She already chose "time travel" as super power. But, since she might be a closet nerd, Bat Girl would be perfect for her, as her alter ego is a librarian.

Omri at Mere Rhetoric could be Atom, getting into places he shouldn't. And Daniel of The Jewish Fist could be Green Arrow. That should help him deal with the local "nuisances"
in his area.

What about Occidental Israeli? Could he be a Human Torch?

Now, how could I possible forget Micha'el at My Random Diatribes? He's one of the few bloggers I know "in real life." He has just the personality to be a super hero. But which one? Which super power would he choose.

Jacob tagged me and I have been remiss on replying. Superman could be very cool, but I have a lot of Wolverine in me.

Well I Tagged, and now I'm going to sleep!

Jack, oh, that's right. Whoops. Anyway, why don't you ask your kids which super power they think you should have,...or don't want to have.

Yes, Batya, you ARE Wonder Woman.

Unless I misunderstood your line of reasoning...

Micha'el, Actually, the point is that readers are supposed to stay tuned for YOU and the others to post the meme and response on your blog.

I don't have time to start guessing other people's superpowers (rule 3), so I'll just tell about my own:

I'd choose to be able to edit my character stats according to either the Fallout SPECIAL system, or the D&D system as exemplified in the videogame Planescape: Torment. Now, I am assuming that I would have full editing powers, i.e. I'd be able to go beyond the standard character-creation limits (your stats start at "average" and you have only a few extra points to spend wisely), and rather, I'd be able max out all my stats were I to so choose.

Now, why would I want to be able to control all my character stats? Simply put, I'd be able to make myself almost perfect in every way! I don't think I need to elaborate.

But why would I want to have access to both Fallout's and Planescape: Torment's systems? First, Fallout only lets your stats go up to 10 out of 10, which is the level of a perfect but real human. For example, an Olympic athlete might have 10 strength and agility and endurance, etc., while Einstein might have had 10 intelligence, and many celebrities might have 10 charisma. By contrast, D&D lets stats go up to 25, with 18 being average (so an 18 in D&D is a 10 in Fallout's SPECIAL). However, most D&D settings let your character (a human, elf, dwarf, etc.) go only up to 18, with 19 through 25 being reserved for special creatures like giants, angels, demons, etc. But in Planescape: Torment, your HUMAN character is able to go up to 25! For example, if you achieve an agility of 25, the description given for your character is that you could literally dodge the angel of death. Actually, Divine Divinity's stats system also lets you achieve super-human levels, and it also, like Planescape: Torment, gives delightful text descriptions of the qualitative meaning of your number.

So I'd want Planescape: Torment's system so that I wouldn't be limited to human levels. But why would I also want Fallout's SPECIAL? Whereas D&D has only medieval skills like axe, club, bow and arrow, etc., Fallout has skills like small guns, big guns, melee, hand-to-hand, computers, lockpick, etc. Plus, Fallout has special perk skills, which are non-quantitative special abilities, like the sniper and sharpshooter skills, which (I forget which does which) increase your eyesight as far as guns are concerned and increase your chance to score a critical hit with guns. So with Fallout's SPECIAL, I'd be able to perfect all my skills in things like computers, medicine, and firearms. I'd be able to instantly receive elite army training, a PhD in computer science, and an MD, etc.!

Correction: an 18 in D&D is not average, but rather, is elite human, like Fallout's 10. An Olympic athlete or Einstein, etc. would be 18 in D&D and 10 in Fallout. But whereas Fallout doesn't go beyond 10, D&D goes up to 25, far beyond human limits.

Oh, how could I forget: I'd have access to an inventory editor as well!

yay! I love BatGirl! she was my fave character on the show! (the one with Adam West of course - i like it old school)

I don't think I know enough people in the JBlogosphere to tag others, though, so I'll just answer here.

If I get to pick the powers of one character, it's obviously going to be Kara Zor-El, also known as Supergirl. Invulnerability, super speed, super strength, flight, heat vision, x-ray vision, telescopic and microscopic vision. How can you beat that?

If I have to pick a single power, it'd have to be super speed, a la the Flash (DC) and Quicksilver (Marvel) and Dash (Disney).

What would I do with it? I'd disarm the Arabs. Everything else would be gravy.

Um,...Micha'el. You did what you're supposed to do, post on your own abilities, not guessing those of others. Of course, most people post their responses on their blogs, and only put the link below in the comments. But, that's OK.

Yvonne Craig - IN
Alicia Silverstone - OUT

Oh, and I never much liked Wonder Woman. Too righteous, no sense of humor.

Cool. I like this Green Arrow fellow. He seems like a straight shooter. Other acceptable characters:
1)Batmen-Mortal man dedicating his life to fighting the good fight.
2) The Hulk: Anger and Samsonesque strength.
3)The Punisher: No skewed moral issue of needing to act better than his enemies. He just slaughters them. The Crow is another good one.

I've never actually read a comic book ... or stayed awake through a Batman movie ... I guess I just don't have a head for it. But if you're a comic guy maybe this will disturb you:

LOL at your link.

I don't believe in forcible meme tagging nor the guilt associated with it. But,...

Haven't you EVER thought of having a superpower? Dude, you're a man. You've NEVER thought about having X-Ray vision?? Invisibility?