Paying For The Jerusalem Light Rail Begins On Thursday, Or Will It? 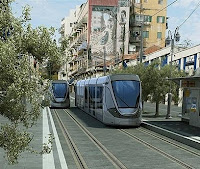 In preparation for having to pay to ride the Jerusalem Light Rail, beginning on this Thursday, December 1, Citipass employees manned light rail stations in order to explain how payments and transfers will work, and to answer passengers' questions.

The ticket machines were already operating, allowing passengers to begin purchasing tickets and monthly passes. Passengers could also check to see if their transportation cards were readable by the light rail ticket machines. I checked mine, and the machine said that it was not readable, even though when I obtained mine from the Egged Bus Company offices, I was specifically told that it would be usable on the light rail.

Both the light rail operators, Citipass, and the bus company operating local transportation in Jerusalem, Egged, produced magnetic or chip-embedded, plastic cards to be used instead of paper tickets. Purchasing discounted tickets or a monthly pass, one pays the bus driver, or puts it into the light rail's ticket machine, and the correct amount of tickets or free time is encoded onto the passenger's card.

Several light passengers' cards received from Egged were not valid for use at the light rail's ticket machines. We were told to go back to the Egged offices, to have our cards "updated."

How many perspective passengers with unusable cards will be willing to stand in line, a second time, in order to be able to ride the train?

When Egged implements its impending, massive route changes and cancelations, forcing many Jerusalamites dependent on public transportation to ride the light rail, at least a portion of their journey, how many fights will break out, and how many riots will take place?

The train ride has been free for the past three months, because Citipass and Egged have not been able to work out an agreement on passes and transfers, and which company will get which money. Now that the agreement has apparently been hammered out, will they have the wisdom to postpone the bus route changes and cancellations until the new transportation card system gets worked out?

Only time will tell.
Posted by Esser Agaroth at 12:10 PM

Cards were rechecked today, and many seemed fine, without having to stand in line at Egged.

I'll let you know once I actually ride the train, and my card passes muster.