Rabbi Lior: There is No Freedom of Speech in Israel

I believe that this statement (the title above) of Rabbi Dov Lior pretty much covers it.

I found the article, in which he made this statement, to be important enough to re-post in its entirety, and have done so below.

Here at Esser Agaroth, I have pointed out several examples of the Israeli government cracking down on rabbis teaching and making Torah statements which stand in contradiction to Israeli law:

The Battles Between The Torah And The State Of Israel

Hello! There Already Is A Ban On Sales To Arabs

Religious Zionists, Make Up Your Minds!

To Refuse Or Not To Refuse

What The Hell Was He Thinking?!

I must admit; I sound like a broken record.

The religious mamlakhti (undying State loyalists) will eventually have to make up their minds as to whether to follow the Torah or the State, because they will not be able to follow both. If they do not, then they will eventually fall off the tightrope they have been walking, and/or explode from the build-up of cognitive dissonance.

Unfortunately, there are still those who continue to insist that such stiroth (conflicts) do not exist between Torah and State.

It is for those individuals (as well as for those North American, religious Jews who have no clue as to what is really going here), that I post this article in its entirety.


Rabbi Lior: 'There is No Freedom of Speech in Israel' 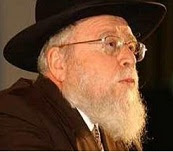 (IsraelNN.com) Chief Rabbi of Kiryat-Arba and Hevron Dov Lior told Arutz Sheva on Tuesday that the decision to launch a criminal probe into Tzfat [Safed] Chief Rabbi Shmuel Eliyahu for 'racism' showed there is no freedom of speech in Israel.

"There is no freedom of speech, but a stifling of expression," Rabbi Lior said after hearing of Attorney General Yehuda Weinstein's decision to launch the probe into statements made by Rabbi Eliyahu to Israel's press.

"It is difficult for me to agree this is incitement," Rabbi Lior said, dismissing the assertion the ruling had nothing to do with Rabbi Eliyahu's Torah views. "Rabbis focus on cultivating a love of humanity, and Judaism touches all righteous people, but Jewish law prohibits one from renting to non-Jews."

Rabbi Lior said, "What Rabbi Eliyahu said is a valid Torah opinion. To prevent rabbis from speaking their minds, which is their duty, is reminiscent of the methods of the Bolsheviks - who only allowed the Jews to express opinions they approved of.

"There's no freedom of expression, but a silencing of the truth. If a Torah scholar studies the Torah and justifies his opinion from sources - explaining his reasoning - even if there are others who disagree with him... it is still knowledge of Torah.

"The right of rabbis to express Torah opinions is on trial!" Rabbi Lior said. "This is against our holy Torah, let alone the rules of democracy."

"You cannot drown out the voices raising unpopular opinions. Rabbi Eliyahu is not a political person calling for insurrection against the laws of the state. He is merely expressing his Torah opinion on a relevant issue. Prosecuting him for this is no different than arresting a rabbi for teaching Sabbath [Shabbat] laws because the state allows people to drive on the Sabbath."

"Every investigation of this sort is an assault on the Torah of Israel, and against democracy and equality," Rabbi Lior concluded.

Weinstein has said he will not probe statements by Rabbi Eliyahu made that stem from his opinions on Jewish law, including his opinion - co-signed by 50 other rabbis - that one may not sell or rent a home to non-Jews when Israel's current socio-political circumstances are taken into account.

Instead, Weinstein claims, he will focus on comments made by Rabbi Eliyahu to Israel's press, such as “The Arab culture is very cruel,” and “When talking about Arabs, people speak in codes that normalize violence and turn into ideology.”

Critics, however, say Weinstein's probe into “public statements” is simply an oblique way of striking at Rabbi Eliyahu for expressing Torah opinions at odds with the ideology of Israel's secular left.

B"H - Excellent! I think however it is time to jump the fence and say it out loud: This so-called "Jewish State" has zero, nil, nougt, none, zip, zilch Jewish content: It is a Golden Calf State and it is goyshe against Hashem and it is goyshe against its Jews, by design! The only thing it does for Jews is the bare minimum in order to confuse them and to deceive them into accepting its goyshe institutions over them, so that the foreign influenced and foreign serving rulers can keep their power and rule over the Jews on the G-d given Land of Israel. Rav. Lior is right, Torah is outlawed and brutally repressed here.

B"H - Corrected version - Please publish this one, ignore the previous one. Thanks.

B"H - Excellent! I think however it is time to jump the fence and say it out loud: This so-called "Jewish State" has zero, nil, nougt, none, zip, zilch Jewish content: It is a Golden Calf State and it is goyshe against Hashem and it is goyshe against its Jews, by design! The only thing it does for Jews is the bare minimum in order to confuse them and to deceive them into accepting and to serve its goyshe institutions, so that the foreign influenced and foreign-interests serving rulers can keep their power and rule over the Jews on the G-d given Land of Israel. Rav. Lior is right, any meaningful Torah that is not home & shul is outlawed and brutally repressed here.

Ariel--One can be skeptical about the values of the organization of the State itself without further damaging the vessal. I would be very, very wary of taking the Leninist approach to a flawed state and destroying it under the assumption that things have to get "worse" before they get "better". In politics of state, thing always get worse before they get even worse than that.

And the matter of Rav Eliyahu us far from final. The courts and the government are most definitely influenced by public outcry and discontent, albeit less than we might wish.

B"H - Chana, the opinion is not "Leninist". It is "Jewish". Torah tells us to do specific things on the Land, what institutions to establish and how to run them and therefore it is NOT an option. There IS a difference between being secular and holy and by the way, we are also commanded to distinguish.

Every state is a type of theocracy. They have something they value so much it sits in the place of deity. It could be the god of pleasure, gay rights, socialism, a constitution (as in America), or the true Almighty.