The Chief Justice Of The Israeli Supreme Court Has A Tantrum 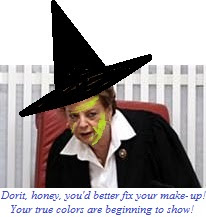 Supreme Court Chief Justice Dorit Beinisch railed at critics Wednesday and charged that “incitement” is undermining what she claimed is the judiciary’s ability to protect the country's "democratic values.”

Critics of the Supreme Court have accused it of exactly the same thing - failing to be democratic by virtue of decisions that are alleged to be biased against nationalists and in favor of left wing groups who want to eliminate a Jewish presence in Judea and Samaria. (Tzvi, "exactly the same is redundant. Please do not use this phrase again, OK?)

Apparently bothered by the charges that justices practice a procedure of replacing themselves with like-minded people, she said, “Supreme Court judges did not grow up as aristocrats. They worked and put efforts into their professional achievements. Why incite against them?”

Beinisch did not explain what she meant by the word “incite.”

Recent Knesset proposals to change the procedures for appointing justices to the Supreme Court and challenging the right of third-party lobbies to appeal to the court irked Beinisch to the point of unusually harsh public comments.

Speaking to the Israeli Association of Public Law, she accused politicians of trying to "damage the High Court, reduce its powers, and prevent it from carrying out its functions, and undermining its ability to protect the country's democratic values."

OK. Dorit. It's like this. The Supreme Court is supposed to interpret laws, not legislate them. And, since Israel does not have a constitution, save for the Torah, there isn't a whole to "interpret."

Beinisch, who will retire in three months, said, "This is a campaign of delegitimization led by several politicians, Knesset members and ministers who take advantage of their immunity to give false and misleading information to the public."

Polls the past several years, particularly since the expulsion of Jews from Gush Katif in 2005, have shown that the public has a decreasing trust in the judiciary, a situation she blamed on politicians for what she called “a campaign of propaganda and incitement.”

Prime Minister Binyamin Netanyahu this week killed a bill that would require High Court nominees to face a Knesset committee, similar to procedures in the United States. Beinisch’s speech Wednesday did not address the process, and instead she asked if the Knesset Members who backed the bill "are also proposing to adopt the unchallengeable respect for U.S. Supreme Court's decisions?"

Let's face it Dorit. What you are really trying to say is what Eric Cartman of South Park, Colorado, is know all too well for saying... (Click "Play")

chief justice is that person which keep large responsibility and they tackle every conditions and that is person which solve people disputes so that they leave a cool life and ,link is present in that case justice in most importance גירושין

Of course, in a Jewish Land with a truly Jewish gov't, this body would have nothing to say with regard to divorce.

It's not in their authority acoording to Jewish Law.