Aviner Is At It Again

While Beit El residents continue davening, the government is still planning to evict the families residing in the Ulpana neighborhood of the Shomron community as was reported by YWN-ISRAEL.

Rav Shlomo Aviner Shlita, a posek in the dati leumi community and resident of Beit El is quoted as telling the tzibur that he will not take part in any protests against such a move should it be actualized chas v’sholom. The plan calls for expelling families from five buildings, each home to six families.

News1 quotes the rav, who told mispallalim during a Friday night drasha that if security forces are sent to remove the families from their homes, he would not take part in a protest. Aviner did not chas v’sholom side with such a plan, but explains that even if the government moves ahead with this “evil act”, then we are compelled “to lose with honor”. He cites three reasons for his hashkafa; (1) A protest is designed to influence others, primarily decision-makers and this is not relevant in this case; (2) Another reason is to instill fear in the other side, and this too is not applicable, as was seen during past expulsions. “The IDF is not afraid of tens of thousands of Jews or 30 million Arabs; (3) A protest is to express one’s dissent and this picture, one of Jews opposing Jews is not the sight we wish to send to the international media.

The report adds that two mispallalim got up and walked out as the rav delivered his drasha. A third mispallel waited until the end of davening and then shouted at the rav, explaining that his words simply weaken their battle against another expulsion.

YWN-ISRAEL NOTE: The Ulpana neighborhood is inhabited for 13 years. Residents purchased their homes legally, with government subsidized bank mortgages. Government agencies funded the construction and infrastructure of the community, now declared illegal by the High Court of Justice

Even I am not sure that I can argue with Aviner's points 1 and 2.  Maybe he's right. We already know what is going to happen.  Why waste our times with these strategies.

Plus, maybe people who continue to trust in a government over and over again, which throws its own people out of their homes, and hands over Jewish land to goyim, even though the Land isn't the Israeli Government's to give away, and sends their sons to IDF to participate in the destruction, deserve what they get.

Point no. 3 is what the mamlakhtim (undying State loyalists) MUST get their heads around already, if they expect to hold onto ANY remnants of Yehudah and Shomron (Judea & Samaria).

Mamlakhti "rabbis" like Shlomo Aviner are holding the Jewish People hostage with threats of "what would the goyim think" if they see us behave this way or that towards our own army, government, and brothers.

Let me tell you something.  The goyshe, Ukrainian Yassa"mnikim (riot police), who actually GET OFF on beating up Religious Jews, settlers and Haredim, are NOT, I repeat NOT, MY brothers!

That's what the goyim would see.

The current piece of Land and apartment complexes are in the northeast of Beth El, a town of over 1,000 families.

Many of the people in Beth El B' should know better. Their rabbi, Rabbi Z. Melamed, has approved of protests, and of refusing IDF orders to throw Jews out of their homes. He, himself, was barricaded in the K'far Darom (Gaza) synagogue, with Rabbi Dov Lior of Hevron, in a last stand against the expulsion of Jews from there in 2005.

Other Beth El B' residents have experienced first hand, and have testified to, the betrayal of the YeSh"A Council collaborators.

The following video shows "Rabbi" Aviner's collaboration with the government in the expulsion of Jews from their homes in Gush Qatif/Azza (תשס"ה/2005).

But, of course, ALL of the above reasons for ignoring "Rabbi" Aviner are completely irrelevant.

It has already been forbidden, al pi din, to ask for his guidance regarding ANY issue for over six years.

Below is an English translation of the p'saq din instructing the religious public not to rely on Aviner for anything.  This p'saq din still stands, and will continue to stand until Aviner comes forth to answer questions about his rulings regarding tohorath mishpahah (family purity). 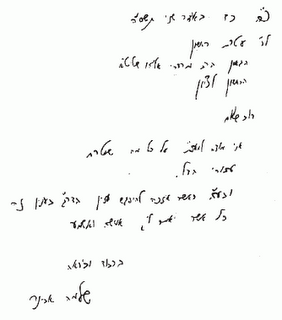 By writing a letter to Rav Mordechai Eliyahu ztz"l, in his own hand (shown above), most authorities have held that Aviner has, indeed, accepted the authority of Rav Eliyahu and Rav Shapira's ztz"l beth din.

Not showing up, when he said that he would, created a problem that the rabbanim (listed below) could not ignore.  When Aviner continued to rule on issues of tohorath mshpahah (family purity), even after accepting the beth din's direction not to do so

Jews make the excuse, "We shouldn't get involved in mahloqoth haRabanim."

For me, that's easy.  I listen to the rabbanim who provide relevant, halakhic sources to back up their rulings, sources which can hold up to scrutiny.  Those who are simply charismatic, and are skilled at giving an exciting and inspiring speech, filled with popular hashqafic notions which people want to hear, do not do it for me, nor should they do it for you.

When one makes decisions solely based on hashqafah, he is no better than those Jews who identify with non-Torah-based, "pick and choose" communities.

Rabbinic Announcement to the Torah Public, 5766

The following Rabbis wrote and signed their names to the following announcement to the public. The original Hebrew letter can be found below.

In addition, the following rabbis have publicly stated their agreement with said public announcement:

To our brethren in the Torah observant community

More than a year has passed since the Bet Din (Rabbinical Court), comprised of three of our greatest rabbis, was appointed to investigate the many complaints lodged against the instruction of Rabbi Shlomo Aviner. With the presentation of explicit evidence, it was made clear that with regard to the issues of menstruation and marital relations (the areas which were checked), he has been permitting things which are completely prohibited under halacha (Jewish Law) And this is not one the issues which carry differing opinions amongst adjudicators and experts, but rather is among the very serious and clear Torah prohibitions which have never been matters of disagreement; and not just one incident, but rather a systematic removal of family purity from amongst those who inquire of him and listen to his instruction. Accordingly, it has become clear that the Bet Din stands by its ruling, yet the aforementioned individual continues to mislead those who make inquiries of him regarding these matters.

To our regret others have arisen, who without having clarify the facts very well and without having approached any members of the Bet Din, have come to strengthen his position against the Bet Din's ruling and to clarify "his approach," and who have been misled by him through various distortions about which there is insufficient room to elaborate them. And, Indeed, it is very difficult for anyone who knows the aforementioned as one who strikes at the Torah and at the very Fear of Heaven, to accept that there is a such personality here, who on one hand brings Jews back to Torah with contradictory language, and on the other hand maliciously teaches the transgression of prohibitions, punishable by excommunication. You cannot judge a book by its cover.


And, here in the conclusion of the Bet Din, the explicit halacha is that regarding one who causes the public to stumble through his teaching on issues punishable by excommunication, one is not to listen to his teachings or guidance on any other matter.

Therefore we are warning every Torah-observant community, those who are interested in the sustenance of Israel in its land through the Word of the Almighty, not to ask nor to accept any instruction or guidance from the aforementioned individual, and thus, not to rely on any of his books or articles. We also turn to all institutions and organizations, and to all who allow the teachings and guidance of the aforementioned written or verbal, and all those who give him validity and public power, not to share in any activity with at all, and not placing any stumbling block before the public, Heaven forbid.

With this, we call on those, who up until now have innocently followed his teaching and guidance, not to be discouraged, inasmuch as they have been innocently following, should adhere to other rabbis from now on. to be truly strengthened in the the path of the Almighty and in the Fear of Him.

We have come to this by the virtue of our obligation to remove a stumbling block from the path of our people and "...for the ways of the LORD are right, and the just do walk in them; but transgressors do stumble therein." (Hoshea 14:10) He who hears will hear, and he who does not will not. May it be the Will of the Holy One, Blessed Be He that He implant a pure spirit from on high upon the entire community of His people Israel, and speedily bring forth for us a complete redemption.