Arutz 7: 'Get Me the Votes and I'll Annex Judea and Samaria'
Economics Minister says he needs 40 Knesset seats to annex Judea-Samaria; 'We're not going to disappear to satisfy their desires'.

Speaking to students at Ono Academic College Monday, Economics Minister Naftali Bennett said that if it were up to him, he would annex Judea and Samaria and impose Israeli law there. “Give me 40 seats in the Knesset and I will take care of it,” he said in response to students' questions.

Bennett spent most of the session answering questions, many of which were about the negotiations between Israel and the Palestinian Authority. He predicted that the talks with the PA would soon fall apart, “for a simple reason – they do not recognize Israel. We must get used to the idea that we will be able to live here despite our disagreements with the Palestinians and their supporters. But we must be unified. We are not going to disappear to satisfy their desires,” he said.

Despite the aura of crisis surrounding the talks and the perceived threat to tens of thousands of residents of Judea and Samaria who would be uprooted from their homes if Israel and the PA signed a deal, Bennett said that things were looking up in the region.

“If you go to the Barkan industrial zone near Ariel in central Samaria, you see that there are many businesses where Jews and Arabs work together. The secret to this coexistence is that when people are working and earning money, they realize how petty the political issues are.”

Bennett added that if it were up to him, he would remove roadblocks in Judea and Samaria. “We need to enhance security with intelligence and intervention, not barriers – and we know how to do this,” he said.

Bennett also said that he was working to ensure that the government did not release terrorists. “We are in a dangerous cycle, where we are being told we have to release terrorists in order to continue negotiations,” he said. “I have conducted many negotiations in my lifetime and I have never been told that I have to pay up front in order to talk, but this is what PA chief Mahmoud Abbas wants.”

Regarding Abbas' threats to take his case to the UN if Israel does not consent to release more terrorists, Bennett said that “Abbas should stop threatening us, as he is alive only because we protect him. Without the IDF, he will not survive,” Bennett added.

Esser Agaroth (2¢):
I have been contemplating this report for a while now. But, it is really not as complicated as some would like to view it.

1. First of all, why are we protecting Abbas? Because we know him, and are worried about ending up with someone worse? This man wants us dead, and he wants our Land,...ALL of our Land! 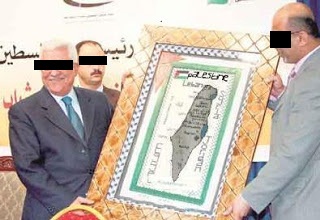 2. Coexistence, with the Barkan industrial area as an example? How many of those Arab workers are spies, fishing for information about where their bosses live? How many are doing reconnaissance? How many will be "activated" during the next Intifada?

Oh, yes! We have certainly seen how well coexistence has worked for us!

Murder, and not bringing murders to justice violate to of these seven. Coexistence, indeed!

3. Look at this map of Bennett's "plan," is this what he means when he says "annex?" 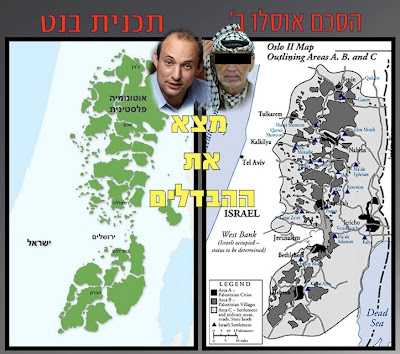 Then what's the point? I mean, seriously?

This is the same recycled plan from the old, washed-up Techiya Party: "Keep the Land, but perish the thought of throwing out the Arabs."

This wishy-washy approach must stop. The only chance we have that it will, is when we finally stop worrying more about how the goyim (US, EU, UN, international community, etc.) see us, than how we view ourselves, not to mention how The Almighty, who promised ALL of this Land to us in the first place, views us.

Bennett makes one or two good points, but the way he thinks we should implement them is nothing less than silly game-playing.

This is not a game. This is not a dress rehearsal. This is real life. As Jews we are supposed to be living these lives of ours according to halakhah (Torah Law),...

" The secret to this coexistence is that when people are working and earning money, they realize how petty the political issues are. "

This is Peres' line, too. It takes a multi-millionaire to think like this which both Peres and Bennet are. Besides what you say about "coexistence" which is 100% correct, the money-grubbers just can't identify with those who act on ideology and principle. They just don't get that for a lot of people, including many Arabs, life is not about making money.

Bennett has been a big disappointment, to say the least.

When will I ever learn?

I'm not sure why you ever expected anything out of Bennett, he has always been a total loser.

I disagree with Moshe Feiglin all the time, but at least he is a serious person. Bennett is just a clown.


I think one problem the extreme Right (a group I consider myself a part of) has is that they don't totally understand reality. Of course the Jews must have full sovereignty over every inch of the Land of Israel and of course every arab must be expelled and mega super of course the abomination on the Temple Mount must be destroyed and our Temple built in its place, but going back to at least Rabbi Kahane, may his memory be blessed, we have advocated doing all of that in one fell swoop. We need to acknowledge the limits of our power and while not losing sight of our ultimate goal, realize that his is going to be a staged process. Even if we were to take power tomorrow, complete redemption of our Land would take decades.

I don't think much of the average Israeli, but they are right to regard us as impractical.

Of course, I never expected much from him. I was just glad he was around to piss off Orlev and Hershkowitz. :-)

You disagree with 100%? I mean he's for Jewish rights to the Temple Mount, etc.

I don't see Ge'ulah coming through K'nesseth, but I do see Moshe Feiglin standing up and declaring the truth (& occasionally, so does Uri Ariel even) which is refreshing. He has a platform. A few Jews might wake up as a result. That is my hope for Feiglin, to wake up even one Jew from his numbed-out stupor.

Funny, you mention Rav Kahane hy"d. He said we shouldn't bother destroying the mosques [yet?], as he figured that the Israeli government would just re-build them bigger and better. :-/

I'll assume he said that tongue and cheek.

I think very highly of Moshe Feiglin and probably agree with him 80% + of the time, but all I said was I disagreed with him often (which is inevitable when someone talks as much as Feiglin does).

Some main issues I have with Feiglin:

1. His hyper libertarianism and insistence that libertarianism and Judaism are related. I am a moderate libertarian myself, but Feiglin's full blown Randism goes way too far and it is also extremely annoying. And why I'm all for liberty, I don't see it as a big part of Judaism. I love the NFL too, but I don't need to pretend it has anything to do with the Torah.

2. His demand for immediate annexation of Yesha. I regard a slow, creeping annexation as vastly preferable.

3. His idea solving the Arab problem with "voluntary" emigration. He doesn't seem to understand that there is no country that will accept such large amounts of arabs. The only solution for the arabs is their forceable expulsion to neighboring states, and that is not possible now. Voluntary transfer is fantasy land stuff, which is why Rabbi Kahane gave up on the idea so quickly after originally advocating it.

4. His claim that the IDF can function without American military hardware. The IDF doesn't need US aid, but it absolutely needs US weapons. Contrary to what Feiglin claims Israel categorically does not have the industrial or technological base to be self sufficient in weaponry. Now 30 years from now, it will. But for today Israel simply needs the US to continue to sell it at least some critical weapons systems.

Feiglin is a great man though. He is one of those rare types of people who you can really respect even if you disagree with every word that he says.


As for Bennett, I always saw him as a Feiglin wannabe without the intelligence, piety or honor. The sooner he disappears from politics, the better.

I, too, do not agree with Moshe Feiglin all of the time. However, since you bring these points, I will take the opportunity to address them:

1. I do not know enough about this subject to comment. I have mixed feelings. I do not see Israel's economic approach changing overnight, though, especially with its grossly, overly powerful labor unions.

3. I agree about the fantasies. However, I am not exactly sure of the best way to implement it.

4. I'm not so sure about that. Standing on our own two feet, separate from the U. S. will have a great psychological impact which cannot be underestimated. Also, also settlers, who are not currently allowed to have weapons, have them, and to protect their own towns instead of heavy IDF presence which should be out in the field instead, will certainly help.