Would You Help These Jewish Refugees?

I saw this ad calling for donations to help families still struggling after their expulsion from Azza (Gaza), ten years ago yesterday. 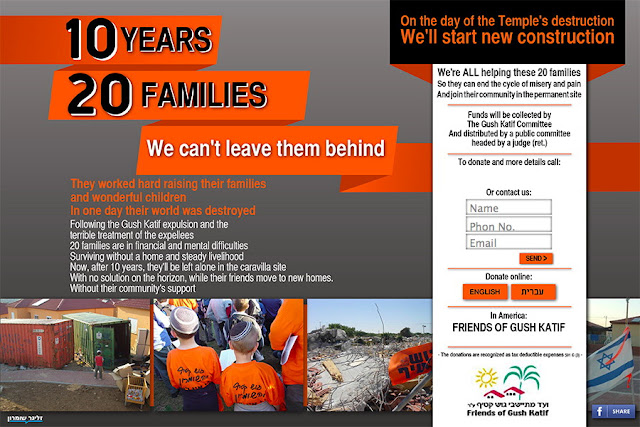 When I first moved to the Shomron (Samaria), I was very surprised to learn that most of those living in Yehudah (Judea), Shomron, and, yes, even Azza were mamlakhtim (die-hard state loyalists). Only a handful of towns, and handfuls of residents in other towns were considered to be strongly connected to Torah taking precedence over Israeli law, whenever the two were in conflict.


"How could our government do this to us!"

"But, we love the State of Israel!"

...were only two of the many cries I remember hearing from the residents of Azza, who were shocked that the expulsion actually happened, and that their government of their Holy State would actually do something like this to them..

I say "Azza," because the area of Gush Qatif was actually only in the southern part of Azza. Four, if not five, of the towns, depending on who you ask, were nowhere near Gush Qatif.

Before the expulsion, members of then Prime Minister Sharon's Likud Party living in Yehudah, Shomron, and Azza, went door to door, visiting fellow Likud Party members, in order to convince them to vote against Sharon's unilateral move to expel Jews from Azza. At first, this strategy appeared to be successful, as the referendum failed. However, in true political form, Sharon went against his own party members' wishes, by pushing through the expulsion anyway.

He simply left the Likud, and formed his own, new, Kadima Party, with none other than Shimon Peres.

And the response from residents of Azza?


More than ten years ago, Efraim Tashnady, long time resident of Neveh Deqalim, approached his local rabbis to ask what they were doing to organize the struggle against their impending expulsion from their homes in Gush Qatif (Southern Azza).

ET: "To pray is good. But which practical steps are being taken?"

Rabbi: "None. Pray. It is upon everyone to take personal inventory, with whichever rabbis he listens to. Not once in history have entire communities been led to such ruin." (What about Yamit?)

Most of the residents of Azza proceeded to follow this advice, and to remain in the same denial until it was too late.

And, what did other rabbis do?

Some rabbis actually aided in the expulsion. That's right. They actually told residents to leave their homes, and helped remove their belonging. Those "rabbis" included Shlomo Aviner, who is still prohibited from making rulings on niddah, yet continues to do so anyway, and Moti Elon, whose coercion of his students to engage in sexual acts with him was recently exposed by his peers.

The relationship between mamlakhti "settlers" and the Israeli government is like co-dependent spouse of an abusive alcoholic, who keeps going back, to be abused some more.

Sure, I feel for these Jewish refugees. But, it is high time to break this cycle of co-dependent, self-destruction, and let the co-dependents on the government which has continued to abuse them all these years to struggle on their own until they snap out of victim mode, and realize who is really on their side, and its not the Israeli government.

So, would you donate to help these Jewish refugees?

I'm not so sure that I would.

Think an expulsion of Jews could never happen again?


Arutz 7 Expert: Israeli Leaders Haven't Learned from Gush KatifProfessor Moshe Sharon says Israeli leaders are still thinking of another expulsion, despite the failure of the first one.

“It is obvious that the expulsion from Gush Katif was a very bad mistake, and I do not want to use harsher words. The mistake is not only because we abandoned the security of the State of Israel as a result of the expulsion of Jews and abandoned the control that we had on this area by the IDF," he said.

"Once we left Gush Katif we gave the whole region to Hamas and gave them a free hand to act against us. Not only did Hamas humiliate the people of Israel when it burned synagogues, we also brought hundreds of thousands of civilians under the threat of terrorism,” added Sharon. (cont.)

Posted by Esser Agaroth at 1:22 PM

The "statist" view is baseed on the idea that the state of Israel is the "merkava of the schina in this world' see the Rav Tau inEmunat Itenu. David Tzohar

Sure, I could check it out. But, it would be very helpful if you could send me the relevant page or two if it's short, of course, including any sources footnoted.

I do have to tell you that a State, initiated, controlled, and operated by a body, whose majority includes those pasul for eiduth, being counted in a minyan, or marrying your daughter, whose appointment (election) is made by a group which includes goyim, of all travesties, and am haratzim does not contribute to any optimism I would have that the State is "merkava of the schina in this world."

The Land? The People? The Torah? Yes, of course. The Shekhinah dwells in the Land, and is dependent on His Will, but has been influenced by our spiritual state, IOW whether we are doing what He wants, or not. I believe that the State is not, and is leading us astray. Purposefully so? No. But, there definitely are those in power you are, bent on the destruction of our control over Eretz Yisra'el, and our identity as a separate and distinct people. And that's not to mention those distorting the Torah for their own gain.

(The Aguda, I believed for the sake of "damage control." However, not to worry, I have plenty to criticize them [& Degel HaTorah] for now, too!)

B'di'avad, of course, I have appreciation for what it has accomplished. I am able to live in Eretz Yisra'el, and be [theoretically] protected from our enemies.

I just believe that it's failing, and not fast enough, doing more and more harm than good, in order for us to establish a Jewish government, before too many more of us get killed under its rule.

For now, I will leave you with this. Assuming that the K'nesseth is a legitimate authority on the level of a Melekh, then what happens when it makes a mistake? Kings of old had the Sanhedrin to keep them in check. Today, the Rabbanuth receives its livelihood from the State, and is hardly independent, and in not a position to keep the government in check.

The Supreme Court? Well, if you do not see the rampant "legislation from the Bench," and the increasing chipping away at the Jewish nature of the State, then I am afraid that your perspective and mine are much more different than I thought. The Supreme Court encourages these [anti-Torah] "mistakes;" it doesn't discourage them.

Rav Kahane hy"d reminded us what to do, when the government makes mistakes. He would quote the following. Needless to say, his fellow MK's were not pleased.

If it's not on the level of a Melekh, then Qal weHomer....