The National-Religious Revolution Is Completed...NOT!

YNET Op-ed: National-religious revolution is completed
Israel's new police chief, Roni Alsheich, joins a long list of senior appointments in politics, in the government, in the defense establishment and in the media of people who were raised in the Religious Zionism movement, controlling the direction of Israel.

If there is a revolution, it has been completed. The national-religious Jews are already here. The new police chief, Roni Alsheich, completes a long series of senior appointments in politics, in the government, in the defense establishment and in the media of people who were raised in the Religious Zionism movement. (cont.)

Esser Agaroth (2¢):
Yoaz, I believe that you are mistaken about the National-religious revolution having been completed.

You see, the Religious Zionists who see Roni Alsheich's appointment as Israel's Police Chief as a victory for what you call "the revolution," are not real Religious Zionists. Many will go so far as to suggest that there is no conflict between the Torah and Israeli law, or come very close to saying so. They have this crazy idea that democracy, or in the case of the State of Israel, deMOCKracy, has something to do with Religious Zionism, Religious Nationalism, or whatever you want to call it.

It doesn't. Democracy is a Hellenist concept. You know Hellenism, don't you? It's that force of assimilation the Maccabees fought against. Their victory and the subsequent re-dedication of the Beth Miqdash (Temple) is commemorated annually in the form of a holiday you may have heard of, called Hanukkah.

When we have an accepted Sanhedrin and King in place, and the Temple has been rebuilt, or, at the very least, the altar, we have begun to move in the direction of Torah governance, have annexed Yehudah, Shomron, Azza (Judea, Samaria, and Gaza), have plans on the table to conquer the rest of Eretz Yisra'el, including Southern Lebanon, and the search is on for the true identity of Amaleq is underway, THEN you can say that the National religious revolution is completed. 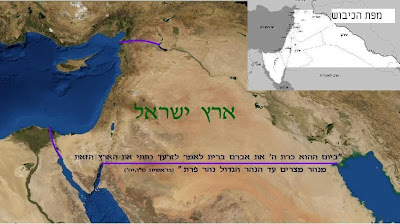 Until then, those identifying as Religious Zionists (National Religious), who believe as you, that Ron Alsheich's appointment is an indication of progress in the so-called "National Religious Revolution" are just deluding themselves. 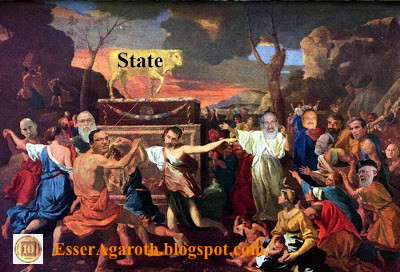 If, of course, by "National Religious" you mean mamlakhti (die-hard State loyalist), propagated by luminaries such as Rabbis Yuval Cherlow, David Stav, Eli Sedan, and Shlomo Aviner, then I will stand corrected, and declare you to be 100% correct. Their "revolution" of their made-up religion does, in fact, appear to be making progress, with the appointment of Roni Alsheich.
Posted by Esser Agaroth at 9:06 PM

B"H - Well, this article pushes me closer to the belief that our differences are nothing more than disagreements on terminology. Yet, in my experience, it is the Religious Zionists who view themselves as you describe them in your second description, they are the ones who give their seemingly unconditional support to the secular State, they are the ones who insert prayers to our sidurim in support of various functions and appointees of the modern State. So, whereas I wish our differences went away and dissolved like the snow under the Sun, it is difficult for me to understand where you get your first and what I consider romantic description of Religious Zionism from. Was it ever anything other than a new religion, a Kookist reform of Torah? Have YOU ever met a Religious Zionist who doesn't send his son AND daughter to the State's very own IDF? Anecdote: Once I gave the Religious Zionist to a rabbi I trust and he unexpectedly shouted out loud: "Chatz v'Shalom!" and explained that after all the evil done in the name of and by this sect, it's time Jews sober up and see reality for what it is and not for what they would like it to be (also known as denial).

RABIN AND THE 20 YEAR MYTHOLOGY
by Barry Chamish

November is the 20th anniversary of the assassination of Israeli PM Yitzhak Rabin and the rulers of Israeli have a litany of lies to celebrate their myth their way, the Labor Zionist way. But like
all Labor Zionist myths, or what Israelis believe is their objective history, it no longer withstands scrutiny.
Objectively, the myths of Labor Zionism are falling to bits and only religious Zionist ideology works. And it's under attack by the state.
I wrote an Israeli bestseller, Who Murdered Yitzhak Rabin, in 2001, later translated into nine languages, followed by hundreds of lectures presenting my proofs, yet my name is never mentioned
in Rabin celebration month festivities. But I won because, a new poll shows:

Poll: Majority of Religious Zionists Don’t Believe Yigal Amir Killed Rabin
The survey found that 68% of respondents said that Amir, who is serving a life sentence, should be released eventually.

The vast majority of the most influential Israeli ideological group don't buy into the mythology guff.

I dread opening my e-mails. Every day I read about more terror attacks. Less protection from the IDF and police. The Israel I moved to in the 70s was optimistic and secure in its borders. Then I watched the destruction of the confidence as PM Begin was pressured by his Foreign Minister Moshe Dayan to take the insane steps out of the Sinai.
So I asked myself what is going on? And I discovered that IDF Chief of Staff Dayan had wheedled Foreign Minister Yitzhak Rabin to agree to stage one of the insanity. Just before the Yom Kippur War, he pulled back troops from the Sinai, and agreed to give the Arab armies 24 hours to attack without an Israeli reaction.
It seemed too fantastic to contemplate but Dayan and American Secretary of State Henry Kissinger were working to wreck Israel and kill plenty of Jews in the process.
And despite the near loss of the Yom Kippur War, Kissinger forced the new PM Begin to make Dayan his FM. And he shoved the Sinai pullout down Israel's throat.
And full circle, Rabin became PM in '92 and Bush/Clinton pressed him into accepting Oslo "peace." This was the second last piece in the planned deconstruction of Israel. The final act is being played out right now.
This summary has been on target since the '90s and every effort has been taken by Jewish powers to squelch my truth. Because if the obvious truthfulness is released into our consciousness, we will have to change our myths, face up to the lies, and unite to save our people. We will have to think Netanyahu's meeting with Putin, followed by Russian jets bombing Syria and Israel beginning an intifada of Arab
stabbing attacks, might not all be unrelated.
You are way ahead of the pack. You know all about this "radical" reality. It's up to you to keep the enterprise afloat.