Beach season has been well-underway in Israel, and that includes the Hof HaNifrad (Separate Beach) in Tel-Aviv. Tel-Aviv's religious beach is located just north of the Hilton Hotel, down the hill from Gan HaAtzma'ut Independence Park.

Men's days are Mondays, Wednesdays, and Fridays. Women's days are Sundays, Tuesdays, and Thursdays. Other separate beaches in Israel divide the days up like in Tel-Aviv. Others stagger the mornings and afternoons instead. 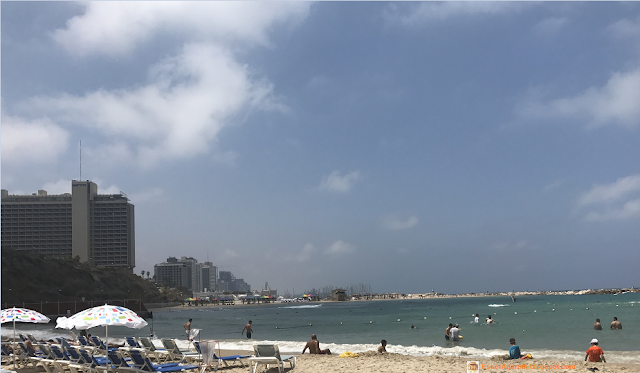 One of the criticisms of the beach's designation as a religious/separate beach is the lack of a mehitzah (divider) on its south side. It was dilapidated and in disrepair, and so why finally taken down, but has yet to be replaced. From where I was standing, nothing "exciting" can be seen anyway. Nevertheless, it should be rebuilt.

Ironically the next beach south which can be seen right underneath the Hilton Hotel has been gradually developed into the unofficial gay beach. You can see the rainbow roofed shaded areas which were just never taken down after an annual celebration. 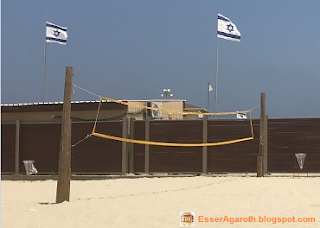 This beach sports a volleyball net, which was in use most of the time I was there on the day  of these photos. 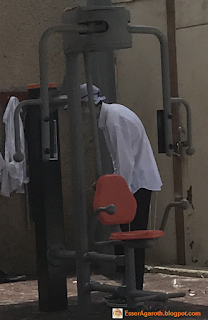 So was the gym equipment. 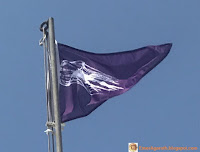 But, the most exciting scene of the day was the "purple flag," indicating the presence of meduzot (jellyfish). There were quite a few of them too. I, myself, was stung, or shot at, or whatever jellyfish do.

The are very hard to see, like glass in water. Even though when they get beached, their color is a milky white.

The lifeguards will occasionally catch them to show the beach goers, especially the kids, in order to educate them about this beach hazard.

One thing I noticed which was new this year was at the snack bar. It seems that it still carries the usually ice cream novelties and junk food. But, it has also added four different beers on tap! Be careful, though, as alcohol can be dehydrating.

Enjoy the beach!
Posted by Esser Agaroth at 10:52 PM