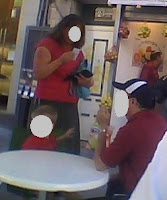 Well, there I was, minding my own business, on Ben Yehuda Street in Down Jerusalem, when all of a sudden, a group of tourists (I hope they are only tourists!) were walking down the street from King George Street. I could not help notice them, as they stuck out out like sore thumb more than the usual goyshe, ugly American tourist.

The color coordinated red tops with blue pants or skirts were the first thing which caught my eye. It was not too soon after that, though, that I noticed their ridiculously fake tzitziyoth (fringes required for a Jewish male's four-cornered garment) were the first sign that something very odd was up with these people. They were attached to the belt loops, and the women had them, too. (Even a self-respecting "reform" or "reconstructionist" would know better about wear to attach them!)

Only once did I see this ridiculous belt loop-tzitzith combination on someone who was NOT some kind of Christian missionary. That individual was a mentally ill Jew who thought he knew better than HaZa"L (Our Sages z"l). Colleagues confirmed my understanding that this belt loop error is almost always a sign of Christian missionary error. Mostly these are goyim g'murim. Once in a blue moon, they manage to dupe a vulnerable Jew into believing in their false deity. This is, of course, the unfortunate occurrence of a Jew raised by brainwashed parents.

I prefer not to use the misnomer "Messianic Jew," because we all know you cannot be both a Jew and Christian, only a false convert or an apostate.

The apparent leader of the group I saw bore the two stars of a Major General on his collar, whatever that was supposed to mean. Either he was a member of the American military at one point, or seems himself as a Christian soldier of some sort. In addition, his fake tzitziyoth were red, white, and blue! (eyes rolling)

He saw that I was taking their pictures. He did not seem to mind, as these people LOVE to be in the spotlight! I told him that the photos would help me to expose missionary activity. His response was a giggle.

Just be aware that these people exist, polute our Land with their beliefs, practices, and desire to brainwash Jews, and pull us away from our true God and His Holy Torah.

No matter what anyone says, their intentions ARE nefarious.

How apt that the so called Gay Parade occured in Tel-Aviv last week. One of this community's chants is...

Christians should take this chant for their own. After all, Jews in Israel are so numbed out to their presence, and to the dangers of their presence. Many Jews are even happy to take their money.

In other words, they are already used to it.

I, for one, refuse to stand idly by, and get used to it!
Posted by Esser Agaroth at 5:25 PM