More Missionary Sightings And What To Do About Them 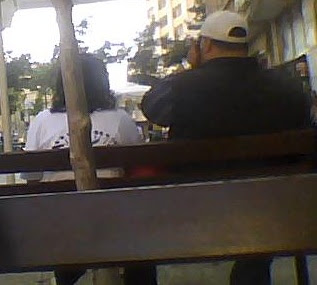 The other day I reported on seeing some suspicious people walking around Ben Yehuda Street.

Well, today I saw some more. Well, I cannot say for certain that the lady pictured in the photo is a missionary, or even a Christian, and I certainly cannot say this about her male companion either. However, she was wearing a T-shirt with the fundamental Christian belief written in Hebrew on the back. Can you make it out? Maybe, she did not understand what she was wearing. I will let you make your own judgments. Unfortunately, I was not able to get a face shot.

I saw another "messianic" activist around Ben Yehuda St. today as well. He used to hang out at an Internet cafe where I used to work. He used to like to engage the customers in theologica 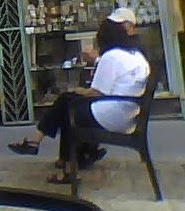 l arguments,...but not on my shift!

The other day I also I teen-aged boy walking into a camping supply store. At first glance, he T-shirt had half of the Hebrew alphabet on the front. Then I noticed something else at the top in English: "So, who is he?" As he entered the store, I got a chance to see the back of his shirt. It had the other half of the Hebrew alphabet, with the address for a "messianic" website below that.

My point in reporting these incidents is two-fold. Jews in Israel, and elsewhere, need to wake up to this very serious problem of soul snatching.

When I can get decent photos, you will be able to help identify them, or at least be able to recognize them, so that you can stay away. Don't engage them. They love that! Ignore them. They hate that! Warn others in the area if you can.

Keep up to date on Christian missionary activities in Israel at Jewish Israel.
Posted by Esser Agaroth at 11:00 PM

I failed to take a picture of him but this week, on Moday, while walking down to the Light Festival at Jaffa Gate, I saw an xtian tourist sitting nearby holding a poster with a quote from the NT. No one paid any attention and the xtian looked like a nut anyway. However, it is a disgrace letting such people into the country where they spread their idol - worship !