The following article is well-worth posting in its entirety, so I am. But, first, here are a few comments.

I am not sure I would call David Stern a "Rambo." He's too nice.

Actually, even though we were neighbors for a while in K'far Tapu'ah, we never got to know each other.

Not only is David an expert in martial arts, and provide an important an much needed service in the Shomron (Samaria), but has also provided survivalist courses. I regret having missed his course, but was inspired to learn a bit with one of his friends. Those Jews not already familiar with their surrounds, know which plants are edible, where the natural sources of water are, and how to manage without electricity, are encouraged to learn about these and other survivalist topics.

Don't think that the food riots in Egypt and parts of Asia "couldn't happen here." They could. The Powers That Be, Iran, and are only three unpredictable variables at play here.

Do not underestimate our hostile next door neighbors either. While living in K'far Tapu'ah without a firearm, I would mentally prepare myself every Erev Shabbath. My weekly routine would include reviewing the potential, defensive weapons found around the house: hot water on the plata, kitchen knives, various cleaning agents,...you know, just in case. I felt pretty safe with our Belgian Shepherd in the house. Still, you never know. Better safe than sorry.

Be prepared. Hmm... Isn't that a motto of the Untied States Marine Corps?

Here's the article about David Stern.

In US David Stern was Marine who taught other officers martial arts, now he shares his skills with children in Itamar settlement. 'When children feel disconnected, this is a way to reconnect them,' he says

Few of David Stern's students in Itamar and in the center for boys who dropped out of haredi yeshivas know that their teacher was once in the US Marine Corps.

Stern, a 31-year-old martial arts expert, started exploring the field when he was a child. By the age of seven he was already training in three different methods of the arts. When he joined the Marines his skills meant that in addition to serving in one of the US military's most prestigious units he was also training officers in Krav Maga.

At the end of four years of service in the Marines, Stern flew to Japan where he trained with a Ninjutsu master and received a 5th Dan black belt.

Encounters with a Marine Corps rabbi led Stern to return to his Jewish roots and become religious. Seven Years ago he made aliyah, and after spending time in Safed he moved to the settlement of Itamar in the West Bank.

Stern teaches the children of Itamar various methods of martial arts. One of his students was Yoav Fogel who was brutally murdered in his home by terrorists 11 months ago. "Yoav was an especially smart child, relatively quiet, who knew a lot and was very social. He came to lessons for a while but left when he decided to invest more time in studying Mishna," Stern recalls. 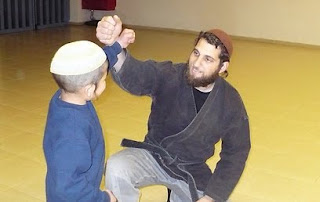 Stern with a student in Itamar (Photo: Itamar Development Foundation)

"He had special charm that you don't see everyday. I remember the special connection he had with the other children. He had something different, something quieter, more serene, and more significant."

Stern says that ever since the brutal massacre the attitude towards martial arts in Itamar has changed.

With more children taking up martial arts, the classes are treated with more seriousness: "They feel that the horrific attack against the Fogel family obligates them to be prepared.

"I feel that the class gives them a sense of strength and security. I pray that if, heaven forbid, a child needs to use the knowledge he gains in my classes, he will be able to defend himself against terrorists.

"A child from Itamar studying martial arts is different from a child in Tel Aviv or Haifa who takes a self defense class. Here, we’ve seen that it's an existential matter. We are currently building a synagogue in Itamar in commemoration of its 20 terror victims and I hope that through my self defense classes we can avoid having victims in the future."

Stern also teaches at a center that offers haredi teenagers who feel disconnected from their environment an opportunity to connect with something. He teaches them martial arts once a week.

"When children feel disconnected, this is a way to help them feel connected. It's a way of life, a system that instills values and more than anything, it enables them to gain self respect – these are children who feel that they have failed in life.

Nice of you to post the article. David is a great guy and a great Jew. I'm honored to have him as a friend.

the motto of the US Marine Corps is "Semper Fidelis"... "always Faithful". usually colloquialized as "Semper Fi".

The motto of the US Coast Guard is "Semper Paratus"... "Always Prepared".

The motto of the US Merchant Marines is: "In War and in Peace".

The Marines are a Naval Infantry. While I completely support the settlement of the hilly core heartland of Eretz Yisrael, I also hope that Torah Jews will not neglect the importance of securing the lawful Exclusive Economic Zone of the country, which has been blessed by He who Guards Israel, with massive natural gas reserves, as we now know.

If you think that the fertile soil of Judea & Samaria was put there for a reason,, please consider the possibility that the natural gas was also....

Alan, Thank you for your comment, the information, and your good points.

Thank you so much, Alan!! I am in complete agreement with you!! Also thanks for sharing your knownledge of US military slogans!!! Kol Hakavod!!!