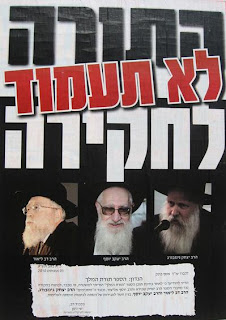 "The Torah Will Not Stand For An Investigation!"
(click image to enlarge)

(Israel National News) Rabbi Dov Lior, the Chief Rabbi of Kiryat Arba and Hevron, and Rabbi Yaakov Yosef, son of the Shas party’s spiritual leader, are wanted for questioning about the book The Torah of the King, which was written by Rabbi Yitzchak Shapira, who heads the Od Yosef Chai Yeshiva in the town of Yitzhar in the Shomron region.
Arutz 7 (Israel National News) has learned that Rabbi Lior was summoned and was asked to present himself to police on Monday morning, but chose not to do so. Rabbi Yosef was summoned for Tuesday but is also not planning to attend. (Read more....)

The IDF Rabbinate was silent during the expulsion of Jews from Azza.

Rabbi Avraham Shapira ztz"l, Rosh Yeshivath Merkaz HaRav Kook, told soldiers to sit in jail before executing an IDF command which violated the Torah, such as participating in the expulsion of Jews from Azza.

Rabbi Yisrael Ariel was arrested for calling Gen. Yair Naveh into his Beth Din (he never arrived), and discussing the halachic punishment for being a mosser.

The Israeli Supreme Court has been telling the Israeli Chief Rabbinate which companies to give kasruth certifications to.

Rabbis Lior and Ya'aqov is just the next in the intensification of the conflict between the Erev Rav controlled State and the Torah. A large segment of the Religious Zionist community, the Mamlachtim, would like to deny that such a conflict exists,...but it most certainly does.

Religious Zionists, Modern Orthodox, and Traditional Jews, the time has come for you to decide which takes precedence, Israeli Law or Torah, because the conflict between the two is only going to get bigger.

The Erev Rav controlled, Israeli government is running scared. To them, those of us loyal to HaQadosh Barukh Hu (The Holy One, Blessed Be He) and to His Torah are dangerous, and threaten its power. We are gaining ground,...not to mention, having more children.

Bringing goyim from the Former Soviet Union to keep the Erev Rav in power did not work as well as it thought it would. Granting rights to foreign workers, including, I predict, citizenship and the right to vote, will also be insufficient.

The only strategies left are to crack down on Torah, and on those who value the study and the keeping of it.

My fellow Jews, you simply can no longer have your cake and eat it, too.
Posted by Esser Agaroth at 10:10 PM

And people wondered why so many Orthodox Rabbis were against the founding of a secular Jewish state. Things like this confirm their worst fears and suspicions.