I was very upset to receive the following e-mail about a former neighbor of mine. Chaim and his wife are the epitomy of "nice," helping their neighbors and young couples getting started, without a second thought.

Chaim is the son of immigrants from the former Soviet Union who are also no strangers to mesiruth nefesh (self-sacrifice). Chaim was in the process of finishing his B. A. in Education with the goal of being a physical education teacher.

Please help, by posting on your blogs, and otherwise distributing this information. 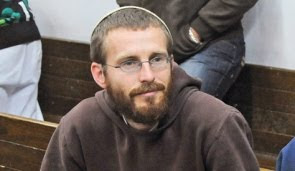 Honenu has recently taken on a high profile case. Chaim Perlman, age 30 who was once hired by the Shabak to provide information has enraged his handlers by releasing 20 hours of taped conversations to the public showing how the Shabak incited him to commit crimes against Arabs.

is being charged with a 1998 killing of two - four Arabs. Pearlman denied all the allegations and said in an interview recorded two days before his arrest and aired on Channel 2 that he was being framed. Perlman claimed the Shabak was taking revenge on him because he taped their conversations. His lawyer claimed that the Shabak has no evidence linking the crime to Perlman. In order to save face, the Shabak needs to obtain a confession. Many times in Israel, a confession is proof of guilt even if there is no evidence corroborating the confession and even if the evidence contradicts the confession. The Shabak denied Perlman a basic right, a meeting with his lawyer. It was 10 days after his arrest that Perlman was finally able to meet with his Honenu lawyer due to Honenu intervention and a ruling of Justice Edmond Levy. Perlman confided to his attorney of the torture he was enduring ie: being handcuffed for 18 hours a day, beatings etc. Now after 19 days under Shabak interrogation, Honenu is once again charging the Shabak with continued abuse.

Donate to make sure that Honenu can fight for a fair judicial process in Israel. Help us build a better Israel.

The Erev Rav govt of Israel has held captive 8 year old Eliel Tessler since April 2010 as a tourist.

Please read the story at:

and the detailed story at:
http://chinuchathome.info/index.php/Israel-and-Redemption/Israel/Seek-Justice-for-Eliel.html

It sounds as if Israel is becoming a police state. Really frightening.
(Saw this post on the Kehila Blog Carnival, btw).

Thanks for the support.