I have always been against this exchange deal. 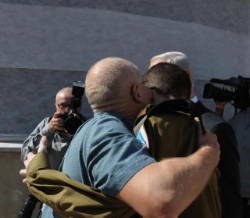 But, who cannot shed a tear at this photo (from JewNews), a reunion between father and son, which most thought would never happen. Only those deluded in fantasy truly believed that those Yishma'elite animals would ever release Gil'ad Shalit.

We have yet to hear what Gil'ad incurred by their hands, what kinds of torture he suffered, what kinds of permanent physical, psychological, and spiritual damage he will have to live with for the rest of his life.

Like most Israelis, I am happy that he has been released, and now back home, amongst family and friends.

Yet, additional questions remain. How long will it take for the thousand released terrorists to start killing again? Will they just step into the shoes of intifada soldiers instead?

How long until the next kidnapping occurs? What will the wait and price be then?

There is a well-known similar incident, which occurred over 700 years ago.

The Mahara"m of Rotenberg was taken captive by the German King, and was held for a very high ransom. The Mahara"m ruled on his own captivity, refusing to be released for the ransom money raised by his students and community.

His reasoning was that by accepting the exchange, additional kidnappings of rabbis for ransom would be encouraged. in the hopes of exchanging them for outrageous sums of money.

He remained in captivity for the next seven years, when he died.

We may be glad that Gil'ad Shalit has been freed. However, this chapter of history is far from over.

Only time will tell if the price was worth it.

In the meantime, let's be grateful for what we have. We have him back.

Enjoy this video of my buddy, Isaac Shiraz from the Jewish Unity Project performing for soldiers in celebration of Gil'ad's release.

We should not have (people)animal alive in Israeli prison that kill,try to kill or help to kill.The prophet Shmuel know what to do with them ,King Shaul did not. (see 1samuel chap.15)as prophet Shmuel said:"As your sword has made women childless,So shall your mother be chidless among women!".

I didn't watch any footage of Gilad's return to his parents. However, I *did* watch the response of the two Schweischruuder brothers after the Supreme Court denied their case for blocking the release of terrorists. Every one of these surviving kids had his childhood ripped away from him; every one has spent the past 10 years not only grieving, but trying frontically and feebly to make up for the loss of 2 loving and competent parents.

I used to work with a woman whose daughter had been murdered by terrorist at the Mifletzet in Jerusalem. Rosa had finally gotten pregnant and everything was going to be ok, and then someone slaughtered her and 2 other people with a knife.

This had happenned years before I met Nina, and sometimes in the middle of work she would just break down. Every time there was a terror incident, she was paralyzed with grief all over again. Sometimes this would happen when she happenned to was a paring knife at the sink in our kitchenette. She always used to say that losing someone was always terrible, but that if it was in a traffic accident or from disease, you could still feel that it was part of life. Murder, she said,always felt like something that was not meant to happen, something permanently out of place.

Chana, Thanks for sharing this. It's important to publicize these stories.

I believe that the only correct policy is the death penalty for terrorists convicted of murder. This is just, moral and correct acording to the Torah. We would be free of the kind of extortion displayed in the Shalit case. I agree with those who say this is not a deterrent to terrorists who are willing to die in order to murder innocent civilians. It doesn't matter, these animals are benei mavet and shouldnt be allowed to draw another breath after we capture them. Let Justice be done.

David, Although I believe you are correct, just think of what the (Hmm...how do I phrase this?) non-Torah oriented gov't would do with such a thing.

...perhaps use it as an excuse to kill those Jews who have killed goyim, even though they may not be given the death penalty (Mehilta, Sefer HaHinuch, Ramba"m).

I wouldn't put it past 'em.

As much happiness as we have, and should have at the return of a Jewish man who has his whole life still to unwind and discover; it does not equal the many heroically lived and courageously given lives of our Israeli predecessors. We have paid for this land with gold, blood, tears and sweat a million times over. And please G-D, one day soon; the bill will be finally satisfied.
Welcome Home, Giladi!
Help us build a nation where our children are safe, educated, have room to dream and grow, and learn Torah, and be at peace with the fact they are Jewish and the intended inhabitants of Eretz Yisroel and the owners of the both the birthright and the blessing.
No, we are not like the other nations. That is why this place is intended for us. And why we alone are meant to dwell in it.