Remember the sukkah I visited for a barbecue in the Shimon HaTzadiq neighborhood of Jerusalem?

That sukkah was vandalized. 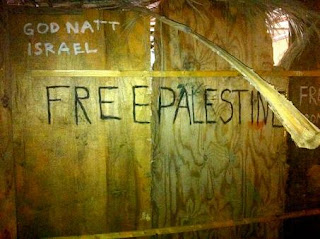 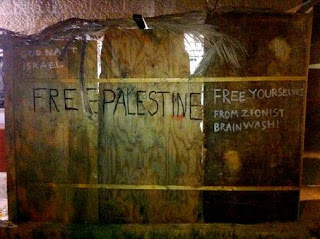 Personally, I agree that we should "stop the occupation."

די לכיבוש הערבי!
Stop the Arab occupation of the Land with gave to Ya'aqov (Jews), and not to Yishma'el (Arabs), and certainly not to Esau (Euro. Left AND Right-wing Christians).

To deny this, is to deny the very validity of the Torah. None of this... "Well, it depends on what you mean by Torah." crap. "Torah" means both Written AND Oral Torah, sans denial and distortions.

As politically-incorrect as that sounds, limiting the Land to a specific people, I refuse to allow the truth to be silenced.

Saudia Arabia does it.

The Palestinian Authority will no doubt do it, when some Jews decide to stick around irregardless of what the Israeli Government decides or does not decide.

Believe you me. Some of them us WILL stick around.

And our brethren on the Left have this insane idea that even if we wanted to slice and dice the Land of Israel, that we could dish it out to not non-Jews.

We can't. It's not ours to give away!

Didn't anyone take the opportunity to read Rash"i's first comments on the Torah last week?

We do what we our supposed to do, follow the Torah, fight for the Land (among other things), and then HaShem decides which pieces fall into which hands, just like in תשכ"ז/1967, תש"ח/1948, and תשל"א/1973.

Even in תש"נ/1948, we made it all the way to the Litani River in what is now Lebanon, which according to many authorities is the northern border of the territories of Asher and Naftali.

Then in typical Erev Rav fashion, we handed it over to Arabs, just like the Sinai, the Temple Mount, Yericho, Hevron, Ramallah, Azza, etc.

I refuse to allow the truth to be distorted, by the left OR the right.

The response to the vandalism in the Shimon HaTzadiq neighborhood appeared to be the same. They expressed it by "fixing" the graffiti. 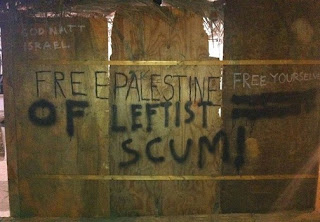 Posted by Esser Agaroth at 2:00 AM

B"H - I agree also with the slogan: "Free Yourselves From Zionist Brainwash". Right, let's all be Hashemists, according to His Torah: Only Jews (& Gher Toshav) On The Holy Land!

Remember: Zionism is just a part of the Torah, not the club headed by Shimon Peres. Don't let people like him and the mamlakhtim distort the truth!

Zionism is what you and I think it is, not bowing down to the State.