Sukkoth In The Shimon HaTzadiq Neighborhood

It was a lot fun, meeting old friends and new, as well as seeing the dog I helped raise, when I lived in K'far Tapu'ah (see photo below). Hot dogs, Kabob, and chicken were on the menu, along with singing and Torah in the sukkah. 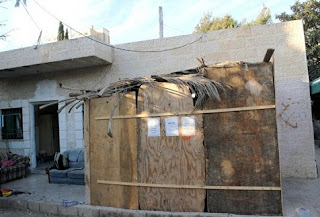 During tefillath minhah, as the repetition of prayer began, Arab children came over to peak onto the property, and started making noise. Their mother came over, and joined in. Other Arabs began screaming, including very unpleasant things about God, surprisingly.

A few of us who had already prayed went out to investigate, and discovered several Norwegian Leftists inciting the Arabs against us. Esau and Yishma'el working together; Esau manipulating wild and idiotic Yishma'el, actually.

Women stood in front of the entrance to the property, knowing full well that it is forbidden for Jewish men to pray in the presence of women, especially how these women were dressed. One even trespassed on to the property, sat in back of our sukkah, texting to her heart's content, throughout the entire evening. We just ignored her, as she ended up sitting within the [supposed] property of one of the Arab neighbors.

The Norwegian Leftists' complaint was that we Jews were occupying "Palestinian" lands.

This demonstrated how truly ignorant AND Jew-hating these Europeans (Esau) are. Jewish have simply been reclaiming property which they had lost during the Israeli War of Independence.

Who is "occupying" whose land and homes???

After the fall of Sadam Hussein in Iraq, Iraqi citizens filed for reclamation of lost property, which had been confiscated or lost, due to the need to run for their lives. Doesn't anyone remember how Jews were singled out, and denied these rights? Did any Jews have Iraqi citizenship restored or property returned? For certain, they did not receive the minority status granted to other ethnic groups in Iraq. Yet, Jews have had a presence in Iraq for over 2,000 years.

Esau and Yishma'el treat us the same way here in our own homeland, while we continue to let them, and everyone else, to step all over us.

Irregardless of the light drama which played out, I had a nice time, and hope to go back sometime. The irony is that this neighborhood even has its own light rail station. As "occupations" go (eyes rolling), this one has a tremendous amount of mainstream support.

Now that I think about it, I wonder why we did not "release the hounds." Besides Shiksa, there was one other Belgian Shepherd available for Arab and Leftist chasing duty. I guess that even "right-wing fanatics" (eyes rolling) know when to choose their our shots. Go figure....

*********
Here is a video (Hebrew) of Yehonatan "Yoni" Yosef giving a guided tour through the neighborhood, lecturing on the rich history of this neighborhood. His grandfather, former Chief Rabbi Ovadiah Yosef celebrated becoming bar-mitzvah in this neighborhood, and was the ba'al qore' (Torah reader) there for several years.

The Jewish presence and history of this neighborhood begins thousands of years ago, and only had a short break from 1949 to 1967, when the armistice line was set, separating Jews from from there homes there.

The compositions of his tour groups are usually more mixed, Haredi, Religious Zionist, and and secular, all interested in the history and current activity of the Shimon HaTzadiq neighborhood.

Below are some articles covering the Shimon HaTzadiq neighborhood, interspersed with my comments in blue italics. Meet Shiksa, one of dozens of canines sent to guard in West Bank settlements, dangerous neighborhoods.

In an east Jerusalem neighborhood where tensions between Arabs and Jews run high, sometimes a dog is needed to keep the peace.

Yaakov Fauci lives with his Belgian Shepard 'Shiksa' in one of the few Jewish houses of an almost entirely Arab neighborhood.

Israel’s Best Friend sends dogs like Shiksa to settlements in the West Bank and to Jewish homes in dangerous neighborhoods of east Jerusalem.

Construction plans drawn up 'with sole aim of creating trouble,' says Meretz councilman, but head of Israel Land Fund argues, 'Arabs should thank Jews for letting them stay free of charge on land that belongs to them'

The local planning and construction committee approved two separate plans for buildings to be erected near the tomb of Shimon Hatzadik.

The approval provides a recommendation for the Interior Ministry, which will decide whether to give the final green light.

Sheikh Jarrah has become a focal point of conflict between left-wing activists and Arab residents, and the dozens of Jews who reside there in 10 different houses.

The latter moved in on a court order which evicted the Arab residents from their homes. Aside from the approved 13, sources in the municipality said plans were in the works for hundreds of new homes.

"I imagine that within 5-10 years some 200 homes for Jews will be built in this area," Arieh King, the chairman of the Israel Land Fund, told Ynet.

"These are lands that belonged to Jews before the establishment of the state, and after 63 years they have been returned to the heirs. The Arabs that lived here illegally throughout these years should thank the Jews who let them stay for free, and now it's time for the Jews to actualize their rights to this place."

The municipality's Likud representative, Attorney Elisha Peleg, said anyone who rejected Jews' rights to build in east Jerusalem was engaging in discrimination.

"I hope as many Jewish neighborhoods as possible are built in east Jerusalem," he told Ynet, adding that the plans were drawn up by private companies and have nothing to do with the state.

"The lots are being built on illegally and invaded by Arabs right now and in the future, when we receive building permits, they will be asked to leave."

But Meretz Councilman Yosef (Pepe) Alalo said the new plans were destroying the status-quo. "Aside from the fact that the plans arrived insufficiently prepared, they are certainly improper and are entirely aimed at causing trouble," he said.

(Since when is returning property to its rightful owners "improper" and "aimed at causing trouble?")

"The plans were made in order to harm agreements by which Palestinian neighborhoods will be transferred to the future state of Palestine while Jewish neighborhoods remain in Israel. These plans destroy our final hope and have no regard for the fact that the families living in the homes will be thrown out onto the street."

(Well, I guess they should of thought about that, before squatting on Jewish property without permission, huh?)

Jerusalem Municipality stated in response that the plans were private and therefore the construction committee was charged only with checking the aspects related to technical planning, not the religion or nationality of the planners.
Posted by Esser Agaroth at 11:30 PM