...Or Shlomo Moreno, if you're Sepharadi, or Shlomo Hum, if you've Hebraicized your name, if there is such a name, it is still Thanksgiving, an American holiday, in which Americans give thanks that the Pilgrims arrived in North America safely, after their journey on the Mayflower, from religious persecution.

There are more than a few families, as well as organizations, here in Israel which make Thanksgiving Day celebrations.

A friend of mine who lives in the Me'ah She'arim neighborhood of Jerusalem, and has been in Israel for over 40 years, still makes traditional Thanksgiving foods for the Shabbath which follows Thanksgiving. Mashed potatoes and cranberry sauce accompany dinner, and a few spiced turkey wings in a plastic baking bag are thrown into the chollent for Shabbath lunch.

It's cute. It's fun. And it brings back pleasant memories of far away family and friends, a roaring fireplace, and one of the American holidays least offensive to Jewish sensibilities. 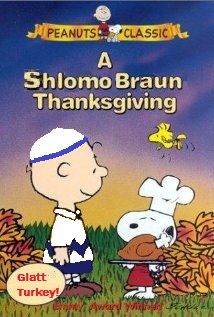 But, I would expect nothing less from this hassidishe friend of mine, reminiscing about what life was like in the Old Country, in the shtetl.

Of course, I am grateful for the opportunities I received, and the relatively easy time I had living Jewishly in the U. S., and specifically in Southern California, the relatively inexpensive University of California education, the ability to walk through Downtown San Diego at 2:00 AM safely, public libraries, the abundance of food, and any number of other things.

I say "easy," in spite of the spiritual challenges American Jews face on a daily basis, after learning of the experiences of my brothers and sister who made it out of other countries.


The Russians, who had to take turns watching at the window for KGB agents during Hebrew lessons, whose parents disguised a mikva as a swimming pool, and maintained hidden matzah machines.

The Ukrainians who had no clue what it meant to be Jewish except for a respect for education and the sense that they were different.

The Persians, who sent secret letters to the Jewish Agency through other Muslim countries, and who trudged across deserts with nothing in order to leave Iran. Those Persians still in Iran find it almost impossible to escape.

The Yemenites who married off their children very young, so that their daughters would not be kidnapped and raped by Arabs.

The Ethiopians who were persecuted in Ethiopia, and then when they had the opportunity to leave, so-called "Reform" Jews arrived "to help," telling them they did not have to convert, thus affecting their status, and allowing for goyim g'murim to flood into Israel, while kosher converts are stuck in the land of their persecution. And, of course, those who did make it out are still treated like crap in Israel.

But, these "things" I received by virtue of having been born in the U. S., were all just to help me to prepare for my return to my true Homeland as a Jew, Eretz Yisra'el.

Whether The Almighty decides to give you all a kick in the pants or not, to make all of you still there realize this, is up to Him. Of course, I pray that it doesn't have to be too hard of a kick in the pants, nor too many kicks in the pants, before you wake up, come to your senses, and come back to your [only] true Homeland, the Land of Israel, and invest yourselves physically, mentally, emotionally, and spiritually in it, and not in the Lands of your exile.

Once you are here, you will have plenty of opportunities to thank The Almighty for the journey he had set you on:

Celebrate the date/Shabbath of your aliyah.

Celebrate Passover and Sukkoth, and give thanks that He brought us out of Egypt.

Celebrate Shavu'oth, and thank him for giving us the Torah.

Add thank-yous to your regular prayers for anything you have received, new and old.

You can eat turkey shwarmah, if you like. After all the word for Hebrew words for turkey and for thanks do have the same roots.


But, for goodness sakes. Leave the holidays of the lands of our exiles behind, and move on to the next chapter in your lives, investing in your [only] true Homeland, the Land of Israel.

You put a heksher (kosher certification) on your turkey, a kippah on your head, and call Thanksgiving Yom HaHoda'oth, but it will still always be an American holiday to be celebrated in America.
Posted by Esser Agaroth at 7:40 PM

Yes, it is an American holiday, but for some of the former Americans who made aliyah, there are fond family memories associated with it, not to mention the yummy traditional food. My kids in Israel miss the family being together on a secular date, and their father's (yes, their father's cooking and baking).

When we get back, may it be soon, in addition to celebrating all the shalosh regalim and the chagim de-rabbanan, we will also probably invite everyone over for a traditional 'Thanksgiving' dinner at the end of November, just for the sake of getting together to eat American traditional food.

It's not a chag, it's not a Yom Tov, it's a nostalgic family gathering full of childhood memories. Just relax...

B"H - Lady Light, the Rambam is clear on this and in his Hilichot Avodat Kochavim V'Chukkot HaGoyim, in halacha 36 says "Not to follow their customs or manner of dress". So, whereas your reasoning makes sense humanly, with bringing back memories and smells and atmospheres, etc., in a Jewish context it can be labeled as improper. You are a Jewess in this world first and acting it out should and I believe could fill your Jewish soul with such a joy that is incomparable with the physical pleasures of a rich celebratory meal consumed on the last Thursday of the month of November - by the goyim. Let me here report on the meanings of the names of the goy day and month, with the declared intent to further distance you from their disgusting habits and customs: The right hand man of the supreme god Odin, in Norse mythology, is Thor. He was known as the thunder god, and was responsible for the great thunder and lightning which he created with his mighty hammer. In addition to the atmospherical creations, he also was the god of war and destruction; things that the Anglo Saxons held as grand reasons to live and breathe. Thor's feast day was called aptly: Thor's day. The Anglo-Saxon tongue quickly changed this to Thur's day or Thursday. November is the 11th month of the year in the Julian and Gregorian [xtian] calendars and November was the ninth month of the ancient Roman calendar. November retained its name (from the Latin novem meaning "nine") when January and February were added to the Roman calendar (From voices.yahoo.com and Wikipedia respectively). So, to sum it all up, I'd take extra care not even to appear in Hashem's eyes as someone who might have anything to do with these disgusting customs of the idol worshipping of the historic enemies of the Jews.