What?! Now, Modi'in Isn't Part Of Israel Either? 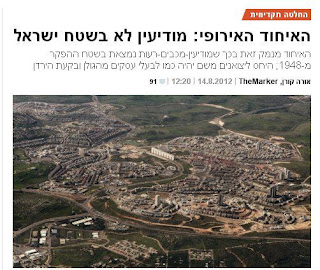 So, apparently, the European Union does not consider Modi'in and its suburbs Maccabbi'im and Re'uth to be part of Israel, and will be treating exports from the area the same as it treats exports from the Golan Heights and the Jordan Valley.

Give 'em a penny, and they'll take a pound, as the saying goes.

Modi'in is the site where Matithiyahu slayed a Hellenist/collaborator who was performing avodah zarah (foreign/forbidden woship).  He and his sons had to flee.  From hiding they launched a guerrilla war against the Selucid Greeks, and their Hellenist, puppet government, which led to the purification and re-dedication of the Beth HaMiqdash (Holy Temple), commemorated by the eight-day festival of Hanukkah..

This only goes to show you that the Israeli Government cannot pick and choose Israel's borders.

They have already been chosen by The Almighty.  When the Israeli Government rebels against this fact, then The Almighty may allow them to be chosen by the Arabs,...for now.  (God forbid!)

The world only recognizes Tel Aviv as ours. Wonder why that is?

It's their Western stronghold and home base for the indoctrination of Jews into Western (assimilationist), global society? The left doesn't really believe in pluralism. It believes that even Arabs will eventually come to see that Western (European) culture is the superior culture.

OTOH, it is interesting to note that even Fatah ym"w has ALL of the map of Israel (even Tel-Aviv) on its emblem, not just Yehudah and Shomron.