What Do You Call A Person Who Speaks Only One Language?

The other night I was on Emeq Refa'im Street, in the trendy, Moshavah Germanith (German Colony) neighborhood of Jerusalem. I used to avoid this neighborhood like the plague. Too many Americans for my taste.

Although I have chilled out about it over the years, I still do not seek out opportunities to go there. 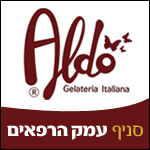 The reason for my going the other night was the birthday party of a friend. While in the restaurant, I saw a waiter ask a lady, in English, if she wanted a menu in English. She replied, in Hebrew, "No, in Hebrew." So, the waiter switched to Hebrew, and got her a menu in the same.

After dinner the birthday boy, another friend, and I went for ice cream. It was the first time I ever had ice cream from Aldo's, and I must say that it was pretty good. I was happy to find my favorites, too, French Vanilla and Belgian Chocolate.

Before I was able to get my ice cream to go, the birthday boy had to decide what he wanted, so he let the family which had just arrived to order before us. He spoke to them in English, but they understood the gesture, and smiled. One of the boys pointed to one of the flavors "Flan," and asked his grandmother what it was. She said, in Hebrew, to him, "It's flan."

Being from San Diego, I am no stranger to flan, a pudding or custard made with milk, sugar, and eggs, and topped, or bottomed, with caramel.

I invited myself to join in the conversation with these total strangers, as is considered totally acceptable in Israel. I told the children, in Hebrew, that flan is a Mexican dessert. Of course, it's found in other countries, but I decided to keep it simple.

One of the boys, probably around 10 years old, turned around toward me, and appear almost in a state of shock. He questioned me, "You speak Hebrew??"

"But you're American aren't you?

"I'm from America, yes. Why shouldn't I be able to speak Hebrew, even though I have really bad accent?"
The boy laughed, and his grandmother grinned. My friends had long since gotten their ice cream. The grandmother suddenly realized this, and insisted that I order next. So, I got and paid for my ice cream, said goodnight, and met my friends who were waiting and schmoozing outside.

I told them what I had happened with the family inside Aldo's. It reminded me of a joke I had heard long ago, which I told them.


Q: What do you call someone who speaks three languages?
A: Trilingual.

Q: What do you call someone who speaks two languages?
A: Bilingual.

Q: What do you call someone who speaks only one language?
A: American.

Sad, but true, the stereotype of the [not-so-]ugly, American tourist is well-known even in Israel, or rather, especially in Israel.

That night justified my feelings about this trendy neighborhood being too American for my taste. Even the native Israelis seem to view English as the neighborhood's default language.

Yet, everyone whom I encountered that night in this neighborhood was friendly to both Hebrew speakers and English speakers alike.

If it were not for the higher than average prices, I might start hanging out in Moshavah Germanith more often. My lousy American accent aside, my fluency in Hebrew seems to garner a certain status, above that of your typical American.

I don't think this is because we American Jews are THAT bad with languages, or or that we simply expect everyone else in the universe to speak English. I believe that it is more probable that we are embarrassed to speak a foreign language in front of native speakers of that language, either because of perfectionism or because of our generally less than superior accents.

Nonetheless,I encourage my fellow Jews from North America, my landsmen, to work on their Hebrew. As they say, "Use it, or lose it." Don't practice you Hebrew. USE your Hebrew.

Even saying hello to a totally stranger will not only aid your Hebrew skills' growth, you may make a new Hebrew-speaking friend,...even in the German Colony.
Posted by Esser Agaroth at 11:57 PM