Peace House Eviction Protests - From Jerusalem Through The Shomron

Here is a recounting of some of the protests occurring this evening in response to the surprise and very violent eviction of Jews from Beth HaShalom (Peace House) in Hevron.

Events personally witnessed by this blogger are in bold; events reported in are in italics.

Afternoon - Arab satellite dishes and water heaters were broken. Even laundry put out to dry was set on fire in Hevron.

4:00 PM - Reports of road blockages and attacks on Arab cars at the top of the Ma'aleh Levonah road. Northbound Arab traffic had been diverted to this parallel route from Route 60 to avoid the road blockage at the Shiloh Junction (See below). The Arab vehicles escaping damage were few to none. Protests then moved to the junction of the winding road to Ma'aleh Levonah with Route 60. The protests reportedly included setting various things on fire.

4:50 PM - Traveling through Jerusalem in order to leave through the northeastern neighborhood of Pisgath Ze'ev, we passed through the Bar-Ilan Junction, where traffic seemed usual for a Jerusalem Thursday.

5:05 PM - Leaving Jerusalem through Hizmah, traffic was almost at a stand-still until Adam, where several police officers and Israeli Defense Forces [IDF] were stationed to monitor incoming and outgoing vehicles. (Jews appearing "too" religious, beware!)

5:30 PM - At Assaf ("T") Junction, there were maybe 20 Jews. No action. They seemed to be semi-corralled in by IDF. Further up the road, the street was lined with teens, blocking the road to Arab traffic, with bodies and with large stones. There were a few scuffles between the youths and the IDF.

5:40 PM - At the entrance to the [notoriously mamlachti] town of Ofra... absolutely no sign of any activity. (Surprised?)

5:54 PM - As we approached Shiloh Junction, Arabs were backed up, and turning back, knowing that the good Jews of Shiloh would not allow them through.

At the junction, Jews were being allowed through. Cars blocking the various routes in and out of the junction were moved immediately upon seeing our bus coming through. There weren't just kids. There were teachers and farmers, young couples and grandparents. (Kol HaKavod to Shiloh Area residents!)

6:20 PM - At the entrance to the [notoriously mamlachti] town of Eli... absolutely no sign of any activity. (Surprised? Well, in all fairness to Ofra and Eli, it is certainly possible that there was some sort of strategy implemented, leaving some points on the main road through the Shomron, Route 60 jammed, and others clear. Quite frankly, though, I doubt it.)

6:40 PM - At the Rehelim Junction, a group of Jews were standing on the western side of Route 60, accompanied by IDF. A few tires were burning in the middle of the street.

6:45 PM - The Tapu'ah Junction appeared to be clear of protest activity.

8:45 PM - Reports of road blockages returning to Tapu'ah Junction have come in. The movable plastic dividers were apparently been piled up in the middle of the kikar (round-about), next to the Hanukkiyah, and lit on fire. Yama"m (anti-terrorist police) arrived on the scene, in fits of high drama, to extinguish the make-shift plastic bonfire. 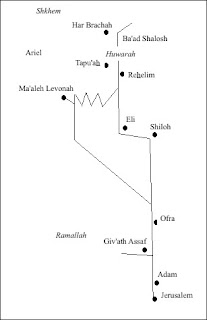 (Click Map To Enlarge)
The map is not even close to scale. It is only here to clarify events by providing town and road locations. Cities and towns currently under Arab control are in italics. The direction "up" is north. Tel-Aviv can be reached by driving in a straight line westward from Tapu'ah; the opposite direction will take you to the Jordan Valley.

10 ag. (Commentary):
I have already gotten into several fights today regarding the "settler" response to the eviction of Beth HaShalom. I have only two things to say:

2. The good Jews of Yehudah and Shomron (Judea and Samaria) are showing the government that there will be consequences when it acts in such a fashion. There's nothing much to read into here, save for any "rabbis'" calls for restraint (was there any?). You can have a field day, and read into that as much as you'd like.

Who will be next?
Posted by Esser Agaroth at 9:00 PM

Correct, this is olmert's labratory: to be applied c"v to Hevron, the west bank, Golan, and Jerusalm.
Don't think netanyahu will be much different! He gave away Hevron, he would also give away the rest.