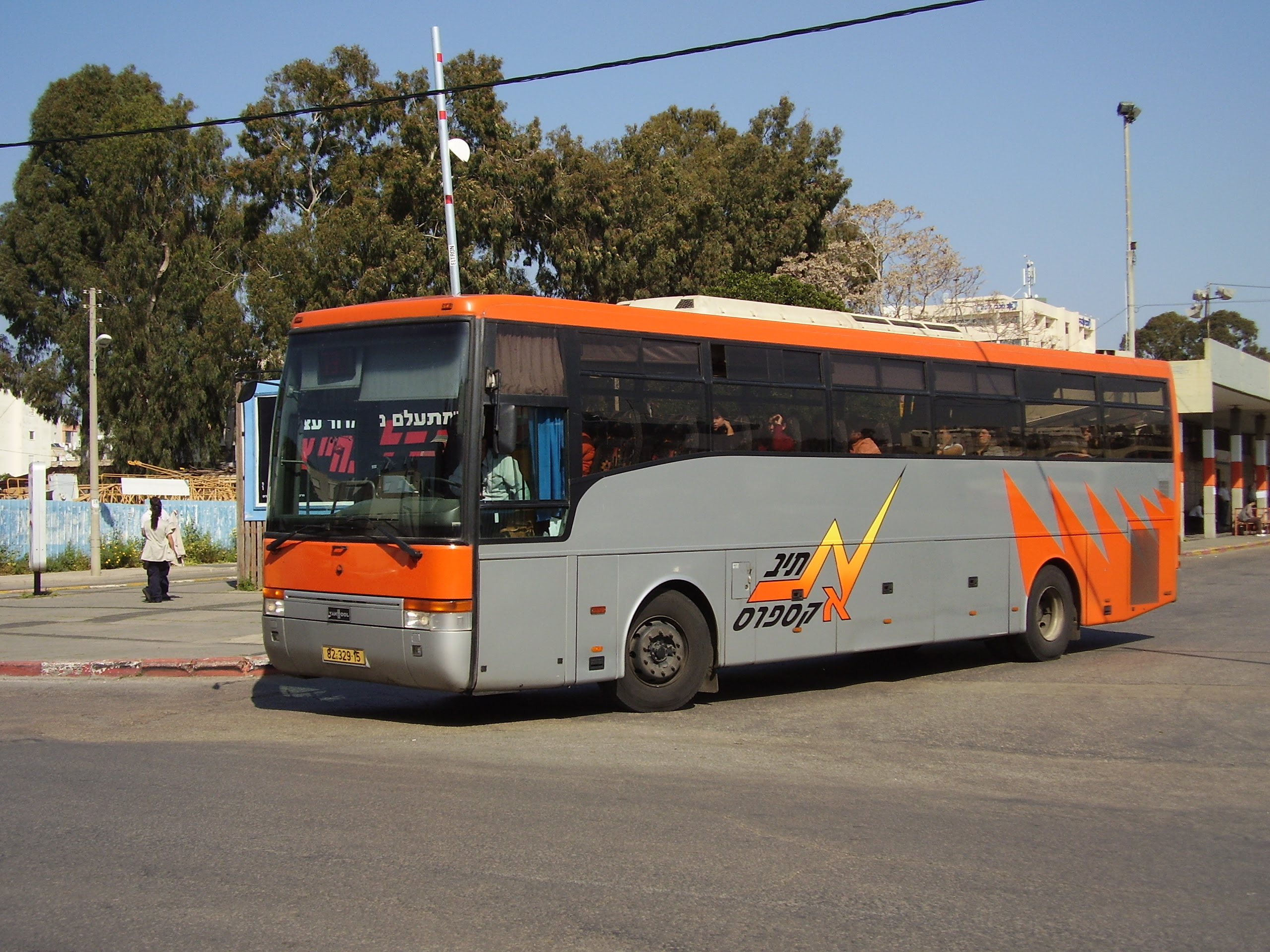 Yesterday at the Tel-Aviv central bus station, I noticed that my transportation to Netanyah would be handled by a company other than Egged, Netiv Express (Hebrew). It seems that this company is now handling traffic in and out of Tzfat, Nahariah, Ma'aloth, Haderah and Karmi'el, among others. It has been handling the Tel-Aviv - Netanyah traffic since March 15, but has actually been in operation since 2001, beginning with Tzfat - Netanyah and Haderah - Netanyah routes.

Does the added competition make a difference? Are these other companies any better? Is Egged shaping up its service, so that it does not lose anymore tenders, or are all of the bus companies just wheeling and dealing, and conducting business as usual?

Rafi at Life In Israel has already told us about the handling of much of the traffic in and out of Beth Shemesh by Superbus, and the service it provides.

The first thing I noticed about Netiv Express was that it was early. Well, my regular 148 Egged bus also arrives consistently early. But, the next thing I noticed was that my trip was cheaper than before, four sheqqels ($1.00) cheaper. Everything else seemed about the same as Egged, except that I have yet to see an old Netiv Express bus. The lower price seemed to be the only difference.

Cellular phone companies have had competition for years. Have you found that to make a difference in service? Some of the companies have tried to reach out to specific communities, such as Cellcom to Haredim, and Orange and MIRS to "settlers." Now that we Israelis are able to keep our phone numbers, even if we change companies, we have one less obstacle to change cell phone companies. For my part, I am just too lazy. But, plenty of friends have already gone back and forth between companies, doing research and trying to get their current companies to beat competing offers. (Of course, some will tell you that there is secret regulation among the various companies. I don't have proof of that one way or another.)

With the HOT cable company offering ground line phone and Internet services, in addition to cable TV, some have reported improved service,... when they have switched over from Bezeq, that is. The Bezeq phone company still does not seem to have its capitalistic act together. Although it is running around trying to do so. With HOT half-way through the Shomron, several of my neighbors have received calls from Bezeq offering them special rates if they sign a commitment plan of a year and a half to three years. The smart ones have said no to Bezeq's crappy antenna-based service, and waiting for HOT which should arrive to Tapu'ah within a year. (Additional towns? I don't know.)

When I bought fan at a factory style store, a couple of years ago in Jerusalem, I noticed something odd. The saleslady, who had excellent product knowledge, gave her employee number to the cashier. I asked her if she got a commission on my fan. She said yes, to which I responded that it was about time. She told me that it was about year since she had heard about such a thing, elaborating that it boosts employee motivation by offering an incentive. She was acting as if this was some great new economic invention. I didn't have the heart to tell her that it was nothing new, and that any American "fresh off the plane" could have have explained the benefits of offering commissions.

Funny you should mention Nativ Express. I also hadn't heard of them until last week, when I needed to take one of their buses to a job interview. The company is located in a small town called Tzoran, which is next to Kadima in the Sharon. It's extremely difficult to reach by public transport - far difficult than most places in Yesha, where at least there is decent tremping. Nativ Express only reaches Tzoran twice a day, with buses leaving from the Beit Yehoshua train station at 9:10 am and 2:10 pm (of course, when I initially called to request this information, they gave me three different and mutually incompatible answers). The bus was new, but it was extremely bumpy, and since the road was in fine condition, it must have been caused by something on the bus itself (too much air in the tires, maybe, but I don't know anything about automobiles).

To your point about competition - no, dividing up Egged's and Dan's routes by region and giving some regions to other companies is not competition. It is just a series of smaller monopolies. I've taken a lot of bus rides on Kavim, which is another regional Dan spinoff, and I can say with full confidence that it's exactly like Dan in every way, except its routes are not listed on Dan's website. The mobile phone service market is competitive, though, and I know that I have had good customer service from Orange. A while ago, an Orange rep called me just to see if everything was all right, and spent a half hour on the line with me, explaining all sorts of things about my bill, answering various questions, and helping me to analyze whether it would make sense to switch to a different plan. I'd never gotten service like that in Israel before. Never.As far as telecommunications (Hot vs. Bezek, etc) I have had a terrible experience trying to deal with both companies, and right now I'm in danger of Hot cutting off my internet because of a billing dispute (in brief, I agreed to pay them a certain amount, they tried to charge me double, and I disputed the charges with Visa). I have yet to encounter anyone who's dealt with Hot and been a happy customer.

NG is right about it not being competition in this manner. One example where there is a modicum of competition is the Tel Aviv - Be'er Sheva lines. Metropoline competes with Egged there, and I much prefer them. The tickets are approximately 40% cheaper and the buses are newer. Everything else is about the same, but such a stark difference in prices is a big deal.

Back to the first point though, there would be some element of competition if every year or so companies control of routes were up for review, with customer input taken into consideration. That way companies would fear to lose their mini-monopolies to competitors.

Not quite free market, but better than Egged in control of everything, charging exorbitant prices and giving very inadequate service.

By the way, HOT is that much worse than Bezeq - across the board?

NG, your essentially right about the regional monopolies. However, the companies compete for tenders and contracts for those regions. For whatever reason Egged did not receive the Beth Shemesh tender this year, nor has it covered service to Modi'in. I think Margolit{?} has that service. So, there is some incentive to provide service and good prices because next time you may lose out, if enough people complain.

Is there wheeling and dealing going on behind the scenes? I don't know.

But there is more "competition" than if there was only one bus company.

LB, No, HOT is better, I have heard, or at least more convenient, and provides package deals.

You still have one EGGED bus line going to Netanya: No. 641 via Petach Tikvah.

I didn't see a difference in using Nativ when I went to Netanya during Pessach but was happy about the cheap bus fare.:-)

Right, Miriam. I noticed this, but forgot to mention the 641. Thanks.