Back To The Beach

I made it back to the beach yesterday during PTH. For those of you not from the beach that "Prime Tanning Hours."

The beach was pleasant enough, playful, with good energy, and no "mean-and-nastiness."

The only major "incident" which occurred. One of the lifeguards called me "Abbaleh" (Daddy).

He asked my to pick up a ripped, inflatable water toy, which had been abandoned, and throw it in the trash for him. I just acknowledged him with a short hand wave, and did what I was asked.

(SIGH)
One lesser incident was when the same lifeguard warned some kids to come back closer to shore, as they were drifting out toward the jetty. When that didn't work, he just said, "OK, have fun with the meduzot." 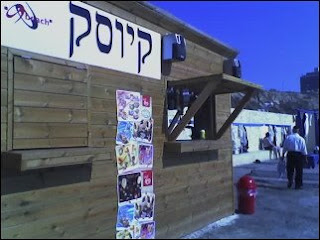 And in case you did not know what this structure was on the beach, there was gigantic sign to inform you of both its identity and function.

KIOSK
I thought that the ice cream menu, stacks of snacks, drinks, and a cash register made it a dead giveaway. But what do I know. Then I realized, the sign was so big so that it could be seen from away.