Here is an example of the Jewish Warrior image and status we must regain, if we are to survive as a people.... 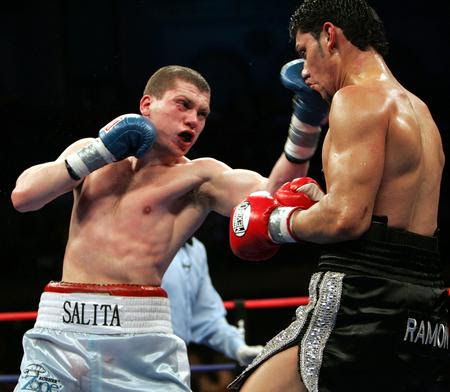 Orthodox Jewish boxer Dmitriy Salita [age 27] will be the first to challenge Amir Khan for the WBA light-welterweight crown, as the unbeaten New Yorker takes on the defending champion December 5 in Newcastle, England....

What the article doesn't say is that he will be fighting against a Muslim, albeit a non-Arab, Pakistani-British Muslim. I suppose we will see if this has any impact as we approach the date of the fight. Amir Kahn was the Olympic silver medalist in the lightweight category in Athens, 2004.

And, yes, as the article does say, Salita is Torah-observant. A survivor of violent, antisemitism in The Ukraine, he became interested in Torah as a teen, after moving to Brooklyn.

Salita shrinks before no contender, but there is one line he said he simply won't cross - fighting on Shabbat.

"Anyone who wants a good whuppin' from me is just going to have to wait until sundown," he said.

I think that pretty much says it all.

Although December 5, 2009 is a Saturday, don't worry. Shabbath will be out in New Castle already by 4:44 pm, plenty of time to prepare for the fight later that evening.

There are several videos of Salita to be found on the Net. I selected this one to place here, even though it is four years old. It includes some music at the beginning by a surprise guest. Check out which famous, Jewish singer escorts him out to the ring.

You can also become a Dmitry Salita Fan on Facebook! (Log-in required)

Posted by Esser Agaroth at 2:31 PM

Very cool. I heard about this guy from a friend. I'm definitely going to watch this fight. Shabbat Shalom and Chag Sameach.

Not an imposing kinda guy but I would not want to mess with him.

Yeah, neither would I.

Do you think he knows he is a role model?

Victim of Ukrainian Antisemitism, no longer being the victim, shomer misswoth, yet physically tough, too.