The Agenda Within The Tents

By now, most of you have heard of the protests over the high costs of housing in Israel.

Also, by now, most of you have heard the admission that those with a "secular state" (Read: anti-Torah) agenda have hijacked the protests.

Thursday, posters just outside one such tent city in Downtown Jerusalem caught my eye. So, I decided to check out the tent city for myself.

"Social Justice?" Now, where have I heard that phrase before?

Oh, now I remember. It is a buzz word of the so-called Reform Movement. Most all "Reform" communities have a social justice committee.

Social justice for foreign workers and their children

Social justice for Christian missionaries, under the guise of "protecting religious freedom"

What about social justice for Torah observant Jews? 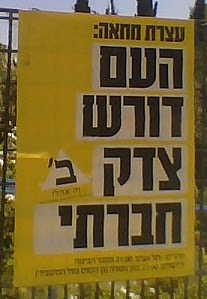 Well, Torah observant Jews are still following a "primitive" culture and lifestyle, based on superstition, and need to become enlightened and progressive, like us (and Europeans), and stop telling me to keep Shabbath, to stop selling pork and shellfish to other Jews, and stop have sex with whomever I want. How dare they violate my precious rights!

Religious settlers are worse than the usual fanatics, because they use our beautiful, Jewish mythology history as justification for violence and the stealing of Land which does not belong to them.

Read: Torah observant Jews, Haredim and settlers in particular, are the source of all our ills, and can go to Hell,...the sooner the better.

Did I summarize the true beliefs behind Reform Social Justice fairly accurately?

"Social Justice" is nothing less than pseudo-"rabbis" and other leftists ripping out newly planted vineyards, planted by settlers days before the start of the Shemitah Year, after which it is forbidden to replant them, until the next year.

"Social Justice" is nothing less than provoking Arabs to attack settlers.

"Social Justice" is nothing less than burning olive trees and cutting pipelines to Arab villages, and then blaming settlers for it.

"Social Justice" is nothing less that publishing maps of Jewish towns, so that they can easily be found on line by leftist and Arab infiltrators.

But, just how many native Israelis do you think are familiar with this connotation of the phrase "social justice?"

The truth is, though, that unity under the protests never had a chance.

Posted by Esser Agaroth at 9:20 PM

Settlers use halacha (Jewish Law) for racism, I was told. Phhh.