The misswah (Biblical Commandment) is to chase after these practitioners of avodah zarah within the Land of Israel, not do the opposite by inviting into our homes as honored guests.

IsraelNN: Nigerian Pastor To Millions Visits Samaria
Nigerian Pastor Enoch Adeboye, in Samaria: "When you are special in the eyes of G-d, automatically people will dislike you."

The RCCG claims to have churches in more than 100 countries, and Adeboye was named one of the world's 50 most influential people by Newsweek in 2008. His followers are said to number tens of millions in Africa, Europe and the USA, and he is sometimes referred to as "the African pope." Mesika and Samaria Liaison Bureau chief David Ha'ivri accompanied Deputy Minister Ayoub Kara on a trip to Nigeria recently, as part of their efforts to find allies for Israel in these embattled times. 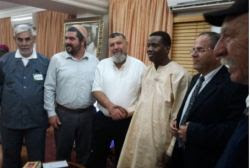 Adeboye is in Israel as Mesika's guest. He met Prime Minister Binyamin Netanyahu and President Shimon Peres on Wednesday.

The pastor is accompanied on his trip to Israel by dozens of senior officials from various African countries, and by several European MPs. He visited communities in Samaria, saw Shechem and the Tomb of Joseph from a lookout point, visited an antiquities site and toured a vineyard. He planted vine seedlings in Har Beracha, whose grapes are used in acclaimed boutique wines, and was the guest of honor at a special reception by Har Beracha Yeshiva Head Rabbi Eliezer Melamed.

Rabbi Melamed told the pastor: "We are very glad to host our distinguished guest. We were glad to hear that you support the Nation of Israel and that you are happy that we have returned to the Land of Israel. We hope that people like you imbue the world with much truth, goodness and kind acts."

Pastor Adeboye said: "I believe that the problems we see between Jews and the rest of the world are because they are G-d's chosen. When you are special in the eyes of G-d, automatically people will dislike you. I do not see why anyone should think that the Jews may not live in their homeland. I believe that no matter how hard they try, they will not be able to move the Nation of Israel from the place G-d gave their forefathers."


But, what this avodah zarah leader did not tell you, is that he is an active, Christian missionary, being so bold as to use the term "Fishing For Men's Souls," on his RCCG organization's website. Their are much too disgusting to post here.

Apparently, no one told Rabbi Melamed either. I find it very difficult to believe that he would ever allow such a person enter the town where is seen as the spiritual leader, Har Bracha.

At least on avodah zarah practicing family is already entrenched there. So, it is becoming increasingly difficult to accept his complete ignorance of what has been occurring in his town.

Perhaps Melamed needs to find a[nother] native English speaker to check into these people and projects for him, before he signs on

Did these "leaders" in Samaria know of Adeboye's missionary beliefs and goals?

Did they want to know?