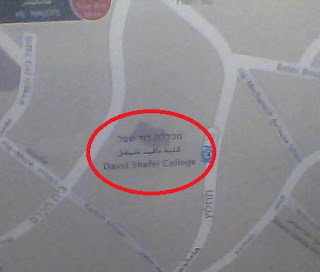 Normally, I would turn this over to Toby at A Time Of The Signs, who specializes in posting about such matters. But, since I know countless guys who are studying, or who have studied, at Yeshivat Darkei No'am (Shappel's - the correct name), I decided to throw this photo up on Esser Agaroth for kicks. After all, it IS still the Month of Adar.

Why is it "college," and not "yeshivah?"

Well, apparently, certain residents of a certain neighborhood felt more comfortable with having a college in their neighborhood than a yeshivah.

I wouldn't worry about such attitudes. Such residents will either have to start producing more children, or else their attitudes will eventually fade away into nothingness.

The times,...they're a changin'. Somethin's blowin' in the wind.
Posted by Esser Agaroth at 7:25 PM