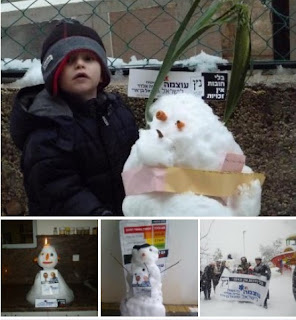 While the nationalist Otzmah leYisrael political party was taking advantage of the snow, by having a Snowman Making Contest, what were Jerusalem Arabs doing? 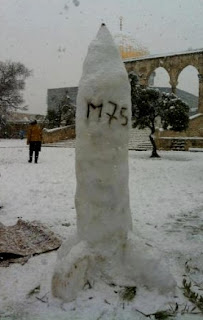 Building snow rockets, near the Al-Aqsa Mosque on the Temple Mount.

Former Senator and President Obama's choice for Secretary of Defense Chuck Hagel (R-NE) might say that this was just a symptom of their "oppression," a perfect example of a Westerner trying to hammer an Arab peg into a Western hole.  It doesn't fit.

Yet the denial of the true Yishma'eli (Arab) nature, mentality, and culture, continues.  The Western attitude that its culture is superior to all others on this planet prevents the West from seeing the truth, and from accepting the reality of the Yishma'eli nature and role on this earth.

The Yishma'elim lie, they steal, they are violent for no reason.  Just look at the Tana"kh (Bible).

They are also sexually violent.  Is their an excuse sexual violence?

The true Yishma'eli nature is expressed even in the snow.  Mothers believing that their primary goal is to impart jihad values to their children, and to encourage them to become martyrs.  The snow rocket is more than representative of the Yishma'eli desire to see the complete destruction of Israel.

That either makes Hagel prey to Yishma'eli lies, or a collaborator.


Hagel: Terrorists Attack because they lack hope. Defense Nominee Claims Palestinians ‘Chained Down Many, Many Years’

JERUSALEM — Terrorism is not a belief but instead is a response to despair and a lack of hope, argued Chuck Hagel in unreported remarks during a 2007 senate hearing.

“But when people have no hope, when there’s despair, little else matters,” said Hagel.

He continued: “And this is not about terrorists don’t like freedom. Tell that to the Palestinian people who have been chained down for many, many years. Terrorism is not a strategy, it’s a tactic.

Terrorism is not a plan. It’s not a belief like democracy or monarchy. It’s a tactic.” Hagel was speaking during a January 24, 2007 Senate Committee on Foreign Relations hearing on Iraq.

His comments were captured in this CSPAN video.

Hagel’s views on terrorism are not abnormal for the Obama administration.

John Brennan, President Obama’s counterterror adviser, once defined them term jihad as to “purify oneself or to wage a holy struggle for a moral goal.”

Brennan is now Obama’s pick to head the CIA. (cont.)

Posted by Esser Agaroth at 1:08 AM