Excuse me, but Exactly How is AIPAC Pro-Israel?


Jewish Ledger: What do you see as AIPAC’s top priorities?Michael Kassen: The underlying AIPAC mission is to help create a very tight relationship between the state of Israel and the U.S. – that’s at the core of our work. We do that first and foremost by working through legislation and through Congress. Our priorities every year include U.S. foreign aid, which is now entirely security assistance. Four or five years ago, some component of that aid was economic assistance to Israel; this year, President Obama’s budget includes a $3.1 billion request for fiscal 2013. That’s very, very important. Not only is the money important, but the overall security collaboration between our two countries is more so.

Hmm...but I suppose that sanctions against Iran,...what? Fell through the cracks? Or perhaps they did not serve in AIPAC's interest. Security funding? You mean keeping Israel financially and emotionally co-dependent the U. S.'s addiction to spending what it doesn't have. So, when the U. S. finally hits bottom (soon than you think!), where does that leave Israel? There is already talk about President Obama's cuts in aid to Israel's anti-missile defenses. Thanks, but no thanks!

Rep. Eric Cantor, the Majority Leader in the U. S. House of Representatives, and who should not be having anything to do with the political scene of his country of exile, rather be here in Israel, where he belongs "told reporters that Prime Minister Binyamin Netanyahu had made a bold and very difficult decision by releasing Palestinian terrorists 'with a lot of blood on their hands.' In doing so, Israel has demonstrated a willingness for peace, but it was important for Israel to secure itself and secure its citizenry, said Cantor, who made the distinction between regular prisoners and terrorists with blood on their hands." (JPost.com)

This is supposed to be a pro-Israel stance?

Rep. Steny Hoyer, the Minority Whip in the U. S. House of Representatives, believes in a two-state solution. Giving away land Divinely promised and granted to the Jewish People is not only anti-Israel, it is pure hutzpah (gaul), if not worse. 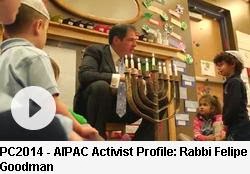 Next on the list of AIPAC stars, we have "Rabbi" Felipe Goodman of Las Vegas. He is just a little bit too close to Christians for comfort, seemingly even providing some validation to their mythology. I wonder how his fellow Jewish "confusing Western concepts with Torah ones" Theological Seminary [JTS] feel about this.

Hey, "Rabbi!" We are supposed to be a separate and distinct People. Fraternizing with the [spiritual] descendants of Esau, is only relevant for our survival in the lands of our exile, where are no longer forced to reside. 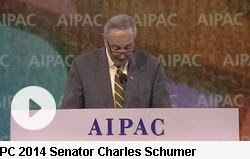 Sen. Charles Schumer (D-NY), considered a "hawkish" pro-Israel activist, does not seem to mind Azza (Gaza) being choked economically. Sounds promising, no? But, he, too, believes in the two-state solution crap. Furthermore, he has somehow got it into his head that the majority of Israelis feel the same way. Hmm... maybe he considers Arabs to be Israeli, too.

Pro-Israel? "Hawkish," indeed! If Sen. Schumer wants to show how pro-Israel he is, then he can resign his position, pack his bags, and get on a plane to Israel already! 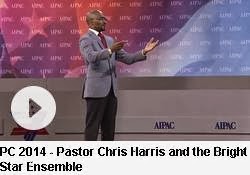 Pastor Chris Harris? Need I say more? A Christian choir at the AIPAC Conference? Hey, I am all for non-Jews supporting us from afar,...FROM AFAR. After all, it is in their benefit, more than ours (Gen. 12:3). We don't need any hanger-onners with ulterior motives, thank you very much! 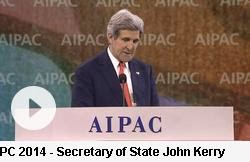 Pressuring Israel into a two-state solution, dividing the Eternal Capital of the Jewish People, Jerusalem, and stationing U. S. troops in Eretz Yisra'el (Land of Israel) for our so-called "protection" appears to be the least pro-Israel of them all, and thus providing the ultimate support for my contention that AIPAC is anything, but pro-Israel. How about some encouragement of Jews to leave the U . S., and to make aliyah (immigration to Israel)?

I won't hold my breath.

Jews are just wasting their time hanging around the U. S., and slobbering over non-Jews, and the Jewish "celebrities" of the non-Jewish governmental system of one of our nations of exile.
Posted by Esser Agaroth at 12:56 PM