The U. S. Continues to String Israel Along

The Jerusalem-based paper Al-Quds quoted Psaki as telling one of its reporters during a press briefing on Friday that recognition of Israel as a Jewish state by the Palestinian Authority “is not necessary”, according to The Times of Israel.

Psaki dismissed the claims via Twitter, writing, that the publication “distorted/fabricated my quote,” and that she “did not do an interview with Al Quds.”

Arafat had already accepted Israel as a Jewish State, but the entire Peace Process has been a process in which the Arafat/Abbas side takes things off the table and escalates its demands and in which American diplomats respond by taking their side.

Abbas is less willing to negotiate than Arafat. That’s not surprising considering that Obama is pandering to Abbas and pressuring Israel. The outcome of that is the inevitable sabotage of the negotiations that will occur when Abbas goes so far that not even Netanyahu will give in. And then Israel takes the fall.

Kerry’s attempt at avoiding the crash by effectively negotiating for both sides only makes the process worse because it frees Abbas to continually escalate his demands in order to break up the process. The more he gets, the more he demands and the more Kerry gives in, abandoning each position for another one.

I believe his observations of the negotiations, and the shady position of the U. S. to be accurate. However, I would like to remind us all of another, important factor here: God.

Yes, I know. Everyone likes to invoke His Name, and to present their perspectives of Him and His Will as being the only valid ones, and I will do no differently.


From my perspective, "Abbas... continually escalat[ing] his demands in order to break up the process," is not just any pattern, but rather a pattern of both mercy and a push from The Almighty, mercy because the Arab tool always seems to end up saving us from our co-dependent, suicidal selves.

Arafat ysh"w did the same thing in 2000/תשנ"ט, even after then Israeli Prime Minister Ehud Baraq promised Arafat ysh"w, 93 percent of Yehudah, Shomron, and Azza (Judea, Samaria, and Gaza). Arafat ysh"w wanted [at least part of] Jerusalem, but even Laborite Baraq would not budge.

Nowadays, things are much different, very much because of the "piece negotiations" (spelled correctly) pattern Greenfield describes above. Jerusalem has been put on the table, whether we like it or not. And this is the "push" from above. Every time we do not pick up on this pattern, put our collective, proverbial foot down, and say, "All of Israel belongs to the People of Israel, because it was and is Divinely promised to us!" the ante gets upped, so that maybe next time, the kick in the pants will be hard enough for us to feel it. May we ALL feel it soon, so that it doesn't have to get any worse!

Do I have any proof of this? No. It is simply what I believe. You may choose to believe so, as well, or not.

As to the main point of Greenfield's piece, it does not really matter what Psaki said or did not say to the Al-Quds newspaper, or to any other newspaper.

As Paula Stern (via Jews News) points out... 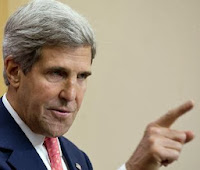 U. S. Secretary of State John Kerry said...
...on March 4: "Any peace agreement must also guarantee Israel's identity as a Jewish Homeland."

Despite the magic of the day, John Kerry’s latest comment infuriate me. He says he doesn’t understand why our Prime Minister insists on the Arabs recognizing Israel as a Jewish state. And yet, just nine days before, the hypocrite Secretary of State said that any agreement would have to guarantee Israel’s identity as the…well, he said “a” Jewish homeland.

So Kerry, do you have an evil twin? Are you going senile? Or do you have a master plan that would deny who we are, what we are, and all that we have strived to be? (cont.)

Esser Agaroth (2¢):
The only logical answers to the question "Why?" all of these outsiders have been doing what they have been doing to Israel, throughout the history of the modern State, and why we have been letting them, can also only be discovered when we bring God into the conversation.

The bottom line is that the various peoples up against us either want The Almighty's exclusive attention, like His First Born already has, or they want to be Him.

In order to achieve either of these goals, wiping out the People of Israel either through Esau's approach of assimilation, or Yishma'el's approach of genocide and taking away our God-given Land are believed to be necessary precursors.
Posted by Esser Agaroth at 8:11 PM