This picture was going around Facebook during the last couple of weeks. I traced it back to a two year old post on the Truth, Praise and Help blog, in which the photo was credited to Yoni Cantor Wiseman. 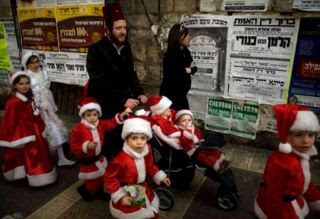 Truth, Praise and Help suggested that we not bother to point such faux pas, as the family in question would not know what you are talking about.

All you have to do is use the right words and phrases, such as "minhaggei haNotzrim" (Christian customs) and "avodah zarah" (foreigh worship). They will get the message.

The same goes for groups of tourists singing and passing out their avodah zarah pamphlets. Some such tourists have the hutzpah to try to stay here, very much like illegal aliens in the U. S. Most are obviously non-Jews to those of us from English speaking countries, but not at all obvious to our native Israeli friends and neighbors.

This is one of the few times when those of us who are native English speakers, and who have experience living among Christians, are the experts. It is our responsibility to point out the abominations occurring right under their noses.

Overlooking a frum family wearing santa costumes, and even calling it cute, is one thing.

Neglecting to point out when Christians are attempting to spread their false beliefs, and to lead Jews to transgress several misswoth (Torah commandments), by stealing their souls, and now, to snag pieces of the Jewish Homeland, is the real fail.
Posted by Esser Agaroth at 12:45 PM

Once I entered a frum store and saw a key chain with Tefilat HaDerech (in Hebrew) on one side, and l'havdil, the "Lord's prayer" (inEnglish) on the other. I pointed this out to the saleslady, saying that chas v'chalilah, someone frum who doesn't know English could mistakenly purchase it for a gift to send to Jews aboad, and if they would tell them that it has a "jewish prayer" (ie, the tefillas haDerech), it could cause major problems. However, she was not the owner, and I was afraid that she would do nothing. Indeed, I rechecked a day later and the stuff was still there. After several tries, I got the owner to dispose of them....