Yes. It Did Snow In Jerusalem

This was the third "threat" of snow from the all knowing, all powerful, Wizard of Oz national weatherman.

The first two were blown off by my meteorologist friend Ya'akov. He tried to explain to me why we had nothing to worry about the first two times. But, since I do not speak "Weatherese" terribly well, I only understood that I should not worry that it would snow.

As it turned out, Ya'akov was right. So, when he suggested that it really might snow this time, I made sure to be prepared. Following his weather updates on Facebook, I knew that I should get everything together for Shabbath by Thursday evening, which I did. But, when I went to sleep at 1:00 AM last night, there was not any sign of snow. 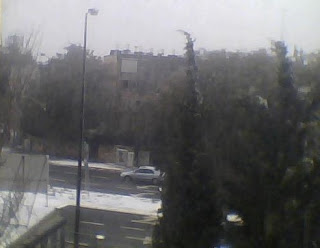 When I woke up Friday morning, snow already covered much of the ground, and whitened the trees here and there. At 10:00 AM, snow filled the air, coming down pretty heavily. After a short break, snow began falling again at around noon. 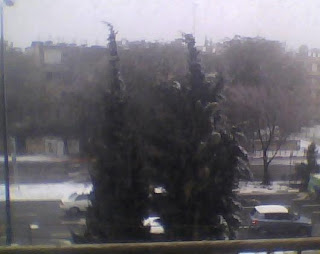 By 2:00 PM, though, the snow had almost entirely melted. Such is life in Jerusalem.

I am glad that I did not have to ago into town today. The custom is that Tel-Avivim flood into Jerusalem every time it snows here, in order to get their dose of it, without having to drive for hours to the Upper Galilee or Golan.

It was snowing again on Shabbath night at around 11:30 PM. The snow was gone again by Shabbath morning.

I am glad for all of the precipitation we have been getting. Apparently, the level of the Kinereth has been rising steadily, and will continued to do so, when the snows melt to fill its feeder rivers and streams in the North.

However, this native San Diegan is glad to say goodbye to snow, and freezing temperatures until next year.
Posted by Esser Agaroth at 6:00 PM