A Select Group of Jewish Leaders? 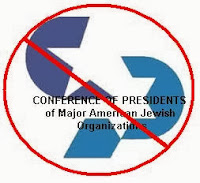 The White House has called a rushed meeting with a select group of Jewish leaders, to take place Tuesday, to discuss its approach towards sanctions against Iran, a Washington source with knowledge of the matter told The Algemeiner.

They are calling specifically on organizations which have taken positions on the issue Conference of Presidents of Major American Jewish Organizations, the ADL, AIPAC and others, the source said.
of Iran including the

High level officials are expected to be at the meeting, including National Security Adviser Susan Rice. (cont.)

I have written about these clowns before. They do not lead me, and they certainly do represent anything I believe it. At least I cannot think of anything off the top of my head.

You see I'm one of those "crazy extremists" (in the opinion of the COPOMJO, ADL, AIPAC, etc.) who actually believes in the Torah, and that The Almighty is in charge, not some silly court Jews, and that the Jewish People is supposed to live in its only true homeland, the Land of Israel ("Land of," not "State of").

The U. S., albeit filled with economic opportunities and other "toys," is not where the Jewish People is supposed to be.

The U. S. is not any less of a galuth (exile) that Yemen, India, or Syria.

Unfortunately, Jews in the U. S. (those who really ARE Jews, and not just products of a Jewish father, and/or falsely converting mother) have been fooled into believing the galuth is not the punishment it is.

Galuth can be a very powerful influence on ones mentality. The plight of American Jews is an excellent example of this. Unfortunately, most do not realize that they are in any kind of plight at all.

Groups like COPOMJO, AIPAC, ADL, and others are just part of the assimilation process, keeping the Jew down,...and out of his only true homeland.

No wonder why they were the "select group of Jewish leaders" selected.
Posted by Esser Agaroth at 11:22 PM