Although Rabinfest 2013 is officially over,...I think, I believe it important to review a few highlights, for the sake of Rabin's "legacy." And, everyone seems to be talking about his "legacy." So, let's take a look at exactly what that "legacy" is.

Over 30,000 people gathered in Tel Aviv Saturday night for the main annual memorial event marking the 18th anniversary — according to the Hebrew calendar – of the assassination of prime minister Yitzhak Rabin.

As if democracy, or in Israel's case deMOCKracy, has any place in an authentically Jewish state kingdom...

Organizers, who put the attendance at 33,000, said this year marked the first time that all Israeli Zionist youth movements — including the Orthodox Bnei Akiva and the rightist Beitar — sent representatives to the gathering. (cont.)

*Hmm,...Not too "orthodox," not too "rightist," huh? The brainwashing seems to be working, thanks to mamlakhtim (undying State loyalists) such as B'nei Akiva Head Danny Hirschberg.)
Esser Agaroth (2¢):

Rabin's "legacy" was basically comprised of giving the order to kill Jews, heroically bringing arms into Israel on the Altalena, to fight for its liberation....

...and implementing the Oslo "Death" Accords, which were barely approved by the K'nesseth, with the aid of Sha"S Party's abstentions, not to mention two cars, "gifts" to two other MK's. The secretly, and illegally, negotiated the Oslo "Death" Accords condemned thousands of Jews to be killed through acts of Arab terrorism and aided by the weapons he gave to them, albeit President Shimon Peres denies that these particular weapons had nothing to do with these deaths.

So far Rabin's "legacy" appears to be...


Guns for Jews to fight for Israel
NO

Of course, I would be remiss if I were to omit Rabin's periodic alcohol-induced vomiting and temporary unconsciousness. But, this is not the problem to I am alluding, nor would his denial of a problem nor apparent failure to seek help. Far be it from me to hit an [alleged] alcoholic below the belt, dead or alive. Rather, a problematic element of Rabin's "legacy," in addition to those elements mentioned above, was that his issues with alcohol made him an easy target to be manipulated. Whether he actually was or not, well,...perhaps one day those details will be revealed to us.

In a nutshell, Rabin's "legacy" is a hell of a lot of Jewish blood on his hands,...or on the hands of whoever was behind the scenes pulling his strings.

And we are supposed to be proud of all this? Make a saint out of this guy, just because he was killed?

In the U. S. at least the veneration of Abraham Lincoln, Martin Luther King, Jr., and even John F. Kennedy is based on something. 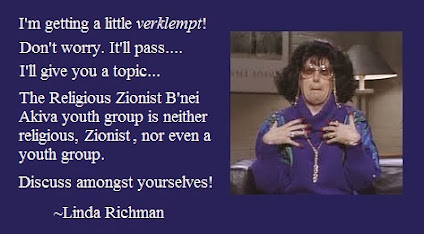 Even worse, B'nei Akiva, a supposedly Religious Zionist Youth Movement is so disconnected with the Left's battle against Torah, it just keeps repeating the same "We'll love you until you love us back" mistake over and over again, expecting different results.


The truth is, though, that B'nei Akiva, and Beitar and both just two of the various conduits for the indoctrination of our children into undying State loyalty, of which Rabin is the quasi-patron saint.

I agree with you on Rabin. He was more of a petty criminal than anything else...