The Jerusalem Knights Festival is almost over,...thank goodness. I first heard about this annual festival from my friend Eitan at A Jewish Israel. When first hearing about this event, while others might have thought about the romance of it all, or the fun they had at a Renaissance Fair in America, I immediately thought about the Crusades. After all, knights + duels + killing + attempts to conquer + Israel = The Crusades.

Sure, knights in shining armor, damsels in distress, quests, magic, Merlin and King Arthur, Robin Hood and Ivanhoe are fun, as are Renaissance fairs. I get that.

The Lord of the Rings and The Wheel of Time, two of my all time favorite series, are extensions of this, albeit not precisely the same time period. 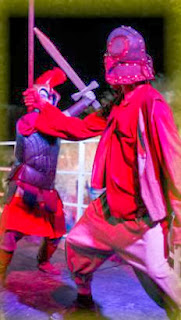 But, what I cannot get my head around is the Christian claim to the Land of Israel, especially when they are still at it, infiltrating the Shomron, lobbying for "religious rights," and enlisting members of K'nesseth to aid them in their sneaky entrance into permanent residence status, and more.

The Crusades were also our first major taste of the wars between Esau and Yishma'el,...with Jews stuck in the middle, as always. This was later manifested in the control over Israel by the Ottoman Turkish Empire, then a change of hands to the British Mandate.

To most, Jerusalem Knights is just another one of those "exciting [non-Jewish] events," recently re-elected Mayor Nir Barakat has promised to inject into the city.

And so, I find it a bit disturbing that Jews are not only cheering for such an event to take place in the Old City of Jerusalem, but are inviting this kind of denial of history into the very city, which is still being fought over (See Zech. 12-14).

It would not bother me so much, if all those participating in the fantasy were not so numbed out to the reality and the symbolism of it all.

Acknowledge the bloody and sneaky history of Esau, then be my guest, and have at it.
Posted by Esser Agaroth at 5:03 PM

There was nothing worth seeing, except maybe for the girls swinging inside the balls at the entrance to Jaffa Gate. Nir Barkat will ruin Jerusalem. He wants to turn it into Tel Aviv~but people. People come to Jerusalem for the Holiness~Something Barkat knows nothing about. As for the xtians, they own more big houses around Israel than the Arabs~Why??

Lol! I love that you mentioned me, homie! I posted 'bout em knights but never actually went to see them...a pity? I can't say I'm sorry...